A Review of The Devil’s Defeat by Ellen Wilson

A Review of Incubus by M. Reed 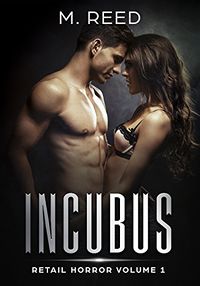 There are some stories where it really is a shame that things come to a close far too soon. Time is spent telling of the characters, making relationships and they trying to figure the other out. There’s a dose of the universe they exist in, there’s a hint of how things work. Something happens, it changes things and makes the story that much more interesting… just as the ending makes everything come to a screeching halt.

However, sometimes there comes a story which is the opening to something more, the start of a series. That brings the hope that there’s more story to be told. It also brings the worry that the author will set what’s a cute and sexy story for the sake of moving onto something else.

One can hope for the better outcome of course.

Martingale, a store located on the astral plane, caters to the needs of beings both magical and paranormal. It’s unusual for non-magical humans to stroll the aisles of Martingale, but Kayla has managed to land a job there anyway. Her job gets much more complicated when she befriends an incubus, and can’t help but feel attracted to him. But will she be able to handle it if he returns her interest?

Kayla finds herself in a situation she didn’t quite expect. It’s not dealing with supernatural beings, nor is it that her new position in sales isn’t a challenge, because it is. It’s her new co-worker, Azeil, who she discovers is an incubus, and she can’t get him out of her mind. But then, Azeil has his own problems… and fears.

Overall the work is a cute mixture of romance with the occasional delightful bit of humour tossed in to keep the main characters fresh and interesting. There is a bit of erotica tossed in, mainly in the climax of the work, but this isn’t so much about the main characters getting together as it is the two of them working out their feelings and moving onwards with their relationship.

That makes the story really enjoyable because it isn’t about Kayla and Azeil been intimate with each other. It’s about Kayla figuring out what she wants, how Azeil reacts to himself. This is the driving force in the work and how that all collides and bounces together and apart makes for a cute and fun read.

Azeil, the incubus of the work, is delightfully unique, there’s nothing stereotypical about him. Similarly, when the author tells of both succubi and incubi, it’s clear they aren’t the traditional sort, at least the few that are encountered. To that point, there’s a succubus called Meredith that I wish had been more in the work than she is. She’s a presence, a really interesting one, but is fleeting.

That is the real issue with the work overall, it’s fleeting in some details, there’s bits which could have been expanded on, more story told, but they aren’t. It turns the work into a hot flash in which the heat is held at bay, the characters are trying to find themselves, and just when things are explained, the work comes to a screeching halt.

It’s troubling because how the work ends leaves so much story to tell. The work is too short, coming to a close right when things really started to get interesting. I really liked both Azeil and Kayla and honestly how things ended there’s still so much story to tell. It’s the missing bits and pieces of this story that bother me, mainly in that the author didn’t expand the work beyond what it is.

That said, the work seems to be the beginning of a series who’s title amuses me all things considered. Hopefully these characters won’t be left behind, and there will be more told about where Azeil and Kayla find themselves.

That, to me, is the story that needs to be told.

There’s a lot to like in this work, more to love, but it’s too short and leaves hanging so many plot threads and ideas. Hopefully the author will continue the story of these characters in the next part of the series. We shall see and hope.