Succubi Image of the Week 523

A Review of Any Job In A Haze by Chris Andrews 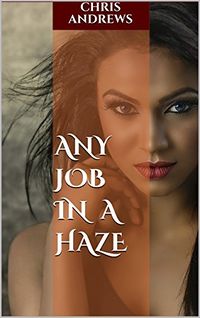 Any Job In A Haze by Chris Andrews

The telling of a story relies on not so much what the characters are as who they are. To say that someone is, for example, addicted to drugs, isn’t nearly as interesting as forcing that character to make a choice. Especially one that has dire consequences. It is the choice made, to trust in the unknown, to see, somehow, that there’s a glimmer of a chance that something good comes out of an act that likely has but one outcome.

That creates a character with purpose around which all others tug upon. Given that another character suggests a story of their own, a mystery to tell and a history to unravel, it would make sense to tell that story as well.

When that doesn’t happen, there’s a gap in the storytelling. It becomes somehow incomplete. Perhaps that’s the most telling part of all.

Sara is a drug addict with a serious lack of money, withdrawal symptoms, and a desperate need to eat sometime soon. When she begs her brother for help, he hooks her up with a mysterious woman in a limousine on her way to dispose of a dead body. The job she offers Sara isn’t even close to what she’d been expecting.

Sara’s life is a living hell. She’s made choices that eat away at her, cause pain she cannot heal and harm to the single bright part of her life. An encounter with a succubus who’s looking for something leads Sara to make another choice. Perhaps not the best she’s ever made, but it is one that, if nothing else, will allow one promise made to be real.

Overall this is a story about characters, about their lives, the choices made and the outcomes. While there is a succubus in this work, there’s no erotica to speak of really. There’s a bare whisper here and there, but it really wouldn’t fit into this story at all. Setting aside the obvious path of erotica that comes with succubi leaves only one thing to support the story, that being the characters themselves.

Sara, the main character, is the voice of this work and being so there’s dearly so much to unpack from who she is, what’s happened before and how she sees herself. It’s complex, emotional and in that I think there’s still a lot not said about her. There’s a path through the story, there’s events and outcomes that alter her. But as the work moves towards the conclusion, some very important things aren’t said or, if barely alluded to.

Tammy, the succubus of the work, is somewhat a shadow of a character. She’s a means to drive Sara into a situation, to make a choice. There’s no real overt sign of her being a succubus, there’s no real descriptions of her feeding in detail, that’s glossed over for the most part. Tammy tells very little about herself, save in broad terms, and I felt that was a shame overall. She’s interesting, seems not to be at all stereotypical in her nature and I would have liked more time spent telling that.

The work flows well, the writing is very good as Sara’s thoughts and emotions come through really well. It only really seemed to lose its way at the last closing pages where things rushed a bit too quickly for me. There are things that Tammy says and Sara doesn’t understand, that I would have loved to have explored. One of Tammy’s promises really intrigues me, what it might mean for Sara and when the work closed I still found myself mulling that over and wondering.

It’s less a story about a succubus than it is a story about Sara’s battle with herself. That in itself is a powerful story, but there’s so many questions left unanswered to explore. They all revolve around Tammy, who is but a shadow, an idea, a tease and not much more.

There’s a real feeling that this is the opening to a series and I really hope that’s true. How the work ends really demands it. Not just for Sara in what her future becomes, but the little interesting hints about what might be.

With all that was placed into the story, the ending just felt like it is missing something. That need not tie up everything with a bow, but at least give something more than Tammy’s smile and the suggestion that something else is going on.

It’s the might-be here that pulls upon my thoughts most of all.