Succubi Image of the Week 519

A Review of Futanari Demon Stories: Vresas the Demoness by Zina Nova 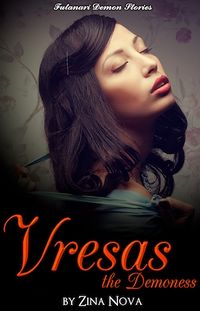 The first work in what appears to be an ongoing series about various futa succubi and demoness this time on the Tale. Futa stories tend to, overall, be missing something much of the time, that being a story which captivates me, characters that are more than their sexual needs as well.

Creating a story which tells about the characters, what draws them together does, as a whole, make the erotica which follows that much better. It’s the difference between a work that has only heat and one in which the heat makes the storytelling better still. But even with the best of stories and the simmering heat that adds to the complexity, an ending that feels rushed can be a stumbling point… and a shame.

Emily has her eye on the strapping young rich guy, Amano Galen. But, one day, she finds a strange note in an old book of black magic—a note which, if true, outlines a method which will put her in contact with the demoness of lust. Accept the pact, and she gets what she wishes. But every pact comes at a price.

Emily has a dream which captivates within her life of 1800s drudgery. A chance encounter with a spell found in a book leads her to call for a demoness to sate her lusts. But not all lusts are what we expect, nor are they what can be admitted in the light of day. But in the presence of lust incarnate, the truth has a way to be told.

The work is historically set in the 1800s and there’s a clear indication from the first words that the author spent some time on the setting and being sure that it reads correctly and feels right as the story progresses. Being so, this allows for quite a lot of character development for Emily, even if at some points that tends to border on moments which seem to go nowhere. Still, the plot progresses well, Emily’s needs become clear and when the chance appears to change her life, to have what she desires, the work becomes quite engrossing.

The story isn’t a matter of driving the main characters together and then thrust them into various bits of erotica. There’s a clear path for Emily to take, a telling of plot and when Vresas, the succubus of the work appears, the sensuality of her character comes clearly to the fore. Vresas isn’t really stereotypical and in being so there’s some very interesting aspects of her character that come out. She toys with Emily, plays with her, and over time Emily falls into Vresas’ embrace in a way that isn’t over the top or takes away from all else that came before.

With all of the time spent in setting up the story, putting the characters together and letting the heat build up, the ending really turns out to be the singular disappointment here. Well over two-thirds of the work sets up the climax, and then the work closes on what amounts to a pair of paragraphs. Given all that the author put into the rest of the work, the ending just took away so much and it really shouldn’t have.

The work is short, and it tells, overall, a complete story, but adding a handful of pages to the ending would have really made a difference. As things stand, the ending suggests what comes next, but nothing more. Emily’s world changes, but that’s not explored or explained. It’s as if the author came to the moment when the plot is resolved and decided to stop. Really that shouldn’t have happened, there’s still a lot of story to be told, even if that was only for Vresas to speak of the future and Emily to reply. A single sentence which speaks of a thought isn’t, by far, enough on its own.

While written well and having quite interesting characters, the ending is a noticeable flaw which bothered me. While I would have liked something more of what came next, or what Vresas’ plans are, its more the sudden ending that bothers me the most. After all of the time spent in creating the story, constructing the characters, to being things to such an abrupt close didn’t work for me.

The author has written several other works in the same vein, which I will be reviewing in time. I do hope there’s more time spent on completing the story well rather than rushing to the ending. This really seems to be the only flaw in what this author writes. It need not be.