The Warmth by TeraS

It’s a shiny costume at least…

A Review of The Devil’s Kin by Ellen Wilson 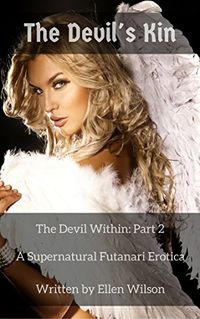 The Devil’s Kin by Ellen Wilson

The thing about telling a story is that being brief doesn’t really give the story a chance to grow and become what it could be. There’s more to erotica than the sex and that’s something which shouldn’t be forgotten.

A review then of the second work in the Devil Within series by Ellen Wilson. Not all bad things in the universe are bad and not all good things are good. But there’s always those that are exactly what they seem to be.

Nicole continues to do everything she can to gather demon souls to get rid of her passenger, Lucifer. And that means getting to use the demonic tool between her legs to do it. Nicole is excited to use Lucifer’s rod, but soon finds things complicating a lot further when divine intervention comes into the picture.

Everything is going to hell for Nichole now that the world sees her as a demon like every other one. But she’s not like them, she has a purpose and if Lucifer actually tells her what’s going on she might get through this mess in one piece. Assuming of course his family gives her the chance to do so.

Once again the work is focused on futa themes with the possession of characters driving the subplots. The sex is once more very dominant and over the top which I think keeps taking away from the work as a whole. That said, there’s a bit more world building, a bit more known about Lucifer and those that are called family and otherwise. It’s quite unique in that and I enjoyed the plot and character building when it appeared.

Nicole is not much different from where she was at the end of the first work, but that’s a function of the plot and time that has passed in the story. But she is learning, to a point, and her new nature gets the better of her too often. But it does work overall and perhaps there’s something to be said about monologuing at least in this case.

The erotica remains too pornish for my liking and really the only thing that kept me in the story was the plot lines once again. Saying that, the new characters being drawn into the story offered something new, regardless of the sex scenes, and hopefully that will give the next book in the series something to build on.

The work is very short again which is very disappointing. There were parts that could have been expanded on, there are a lot of characters coming into the story after all. While the story revolves around Nichole and Lucifer, more time spent in telling the story of the other demons I think would have done a lot to make things better. There’s more here than the futa sex after all.

It’s an interlude really, there’s some world building and how some of the answers are given works overall. But much like the first work in the series, it’s a bit too focused on the futa sex scenes. Again it’s the story around the sex the interests me and if that gets more traction, and the story parts are longer, this could be quite an interesting series.