Succubi Image of the Week 518

A Review of Nun and Incubus: A Demon Breeding by Olivia Tomson 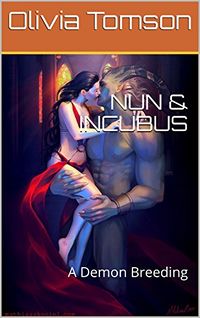 Nun and Incubus: A Demon Breeding by Olivia Tomson

The background of a character matters in telling a story. It’s really not good enough to tease what that might be, or start to tell the secrets and then have the story suddenly come to a close. Similarly, hinting that things aren’t quite what they seem is but a tease of what otherwise is a story that needs to be told as well.

The other issue that comes is when the narrative wanders, seems to be going around in circles for no good reason other than to do so. It tends to leave a lot of story untold and left aside. Perhaps the most telling thing that suggests that a work might be lacking in a lot of ways can be a book summary that’s one sentence and that doesn’t give a lot of confidence in the story itself.

The book summary is lacking in a lot of ways overall obviously and I think something a bit better might be: Cassandra has many questions about herself, not the least of which is why her eyes don’t look normal to others. Taking a chance she casts a spell looking for answers and a demon appears. The question is if the demon will have the answers and if Cassandra is willing to pay the price demanded to find out.”

There’s a lot missing in this work, not the least of which is something in the story that actually connects with the summary itself. The work spends a lot of time with Cassandra, telling a lot about her, at least what she knows before moving deeper into the story itself. Again, there’s a lot of time spent in Cassandra encountering the demon, which may or may not be an incubus, and the deal making is interesting in a convoluted way. But then the story turns sideways into the erotica and the story gets pushed aside for the rush to having Cassandra fall to the demon’s tender mercies.

The demon is never named, and that’s a shame because the character is interesting, there’s quite a lot of personality to be explored in them. The little minutia that’s touched on I really liked and it would have been good to explore his lair more than in passing. At the same time, he comments almost endlessly in his thoughts about Cassandra to the point where it is almost a running theme of impatience that overcomes him from time to time.

The climax of the story is a lukewarm erotically, but at the same time it offers something of a hint as to Cassandra’s nature. Again, that isn’t explored, nor is the tease really played out. But it’s something to mull over and if she is what I think she is, then the book title and the incubus himself makes a good deal of sense. Still, that’s a question that the ending casts aside and leaves dangling.

There’s a feeling throughout that this should be the first work in an ongoing series, but there’s no evidence of this beings so. If there is something to follow this work, then there’s a lot of things to explore overall, not the least of which is Cassandra herself. But at the same time the incubus himself is just quirky enough that telling his story might be more interesting than that of Cassandra herself.

The work could use another editing pass, if only to fill in some of the blanks and certainly improve the dialogue and narrative which could use some cleaning up at least. Perhaps spending as much time that was spent on Cassandra going to the town at the beginning in telling something more about why the incubus is there, what he really wants and, in the moments before the story closes, just something more about Cassandra than her eyes changing all of the time.

It’s a shame that the story didn’t delve more into Cassandra herself, didn’t tell of the incubus more. It’s also a shame that the tease of the world not being quite as it seems wasn’t explored more either. There’s an interesting story here, one I’d like to have seen get past the erotica and certainly beyond the wanderings the story goes through at the beginning.