A Review of Summoning the Incubus by Ciara Bane 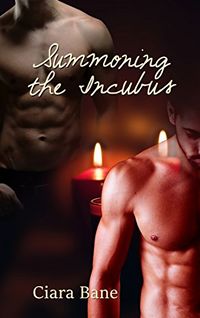 Summoning the Incubus by Ciara Bane

Erotica alone does not a good story make, this is a view I have had many times before and it’s still something I find myself stressing. There needs to be heat, there needs to be character, but most of all, without a cohesive story to make things work, to explain why things are and to tell of the characters themselves, there’s a huge part missing. It really need not be.

Max and his friend-with-benefits, Owen, are just hanging out when Owen invites Max to the party. A party with a bunch of other guys, all ready for anything. It turns out to be more than Max ever expected and he’s used in so many different ways but still left wanting more. Unfortunately for Max, it seems that the other partygoers have an ulterior motive in inviting him in. But the sexy incubus is more interested in Max than his revenge—but will Max let the demon claim mastery over him?

Max finds himself in a situation that he never expected, but dearly enjoys. While his friend might not have told him everything, there’s someone else who knows exactly what’s going on and what they desire. That desire is Max and soon enough he’ll discover that desire matches his own.

The work is, overall, mainly focused on male/male erotica and tends to leave story aside for the most part. The heat is good as a whole, but that seems to be all that the story cares about. At many points there’s story to be told, but the erotica rushes past things, pressing onto the next way that Max finds himself used. It’s that rush, the blurring of the couplings which takes away quite a lot from the story overall.

The summary tells of an Incubus appearing, being it seems a central part of the work, but that’s a bit misleading. Malachi, the incubus of the work, doesn’t actually appear until well past three quarters of the story has been told, which leaves little time to actually tell much about him beyond his physical form, how Max reacts to him, and then the story falls away for more erotica to take things over.

The work really isn’t about Malachi so much as it is about Max being used sexually in all sorts of different ways. Malachi could have been just a Dom and the story really wouldn’t have been all that different in how things turned out and what happened overall.

It’s the aspect of Malachi, of what’s happened to Max that interests me, but save for a few short words to offer a hint of that, the work sets that aside. There’s far more erotica than story and to me that leaves a lot to be desired. There’s an interesting plot thread left dangling at the end of the work which, to me, makes for what would be a good follow up to this work. Max’s story, where it goes from here, does interest me. What doesn’t is a story that’s mainly Max telling of the sex, being immersed in it, and leaving so much untold behind.

The work could use some editing to tell more of a story past the erotica, add more heat to Malachi and Max’s encounter as well. Further, there really needs to be more told about Malachi, how he came to be where he is and what he desires from Max as well. The mystery here isn’t the sex, it’s what comes after the story ends. It’s a lost opportunity to make this story more than the erotica is it and into something far more interesting given the chance to do so.

Somewhat disappointing in that the story is the erotica and more so that this isn’t so much an incubus story than one about M/m domination as a whole. It’s a start, there’s a story to be told, but it’s drowned in the sex which is the real shame.