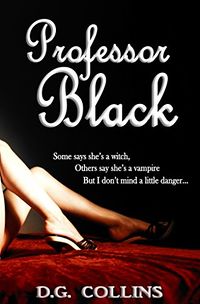 There’s a certain talent in telling a mystery which, when done well, is a mixture of temptation, need and desire. Mixing a succubus into a mystery adds heat, and can make things more complicated as well. That’s not a bad thing, many times it’s an important piece to the puzzle.

Where the issue comes, many times, is building up the mystery, telling the story and setting expectations which, when the other shoe drops, doesn’t quite work. A rush to the last word written is never the best way to tie up the mystery and reveal the truth. Truth tells it’s story in it’s own time and pressing on it to hurry is never going to work well.

How far can your uncontrollable lust consume you?

Damien Fowler: Some say she’s a vampire, others say she’s a witch. But I don’t mind a little danger… No matter how many times they tell me that I should stay away from the young professor, my cock just grows harder with all the warnings.

Natasha Black: They say I’m some kind of a supernatural being, and I just chuckle it out. But there’s this one student, Damien, who defies every warning against me. He’s a very, very attractive man; the kind of man women will spread their legs for in just a wink of him. He seems very eager to do everything to seduce me, totally disregarding the fact that he is actually putting his life at risk…

Damien is singularly focused on the new professor that he can’t get out of his mind. He’s had any women he’s encountered before, but they pale to how much he needs Natasha. It’s a game of cat and mouse, but Damien can’t see that he’s the mouse and Natasha is a very dangerous cat.

The work is a rather involved mystery which tells the story of Damien seeking out Natasha and, over time, having his own fantasies about her turned back upon him. There’s good heat in the story telling and the erotica is well balanced against the mystery as well. The building up of Natasha’s secret isn’t really explored over the majority of the work, being at the edges instead.

The narrative is completely from Damien’s perspective and as such there’s a certain crassness, a self-assured attitude which makes liking him as a character difficult. Natasha herself is a mystery, mainly it is her open sexuality which is focused upon. This is a shame really because there’s so dearly little told about Natasha which leaves a gaping plot hole that’s never explored.

Natasha is, without question, a succubus, but that aspect of her character never comes into play until the very last chapter of the work. There’s some evidence that she’s very stereotypical in that, but the amount of time spent with Natasha in her succubus form is so fleeting as to be almost an afterthought and that really was a shame. The split between her human guise and her real self is glossed over, barely told and it seemed like there could have been a lot more made of that.

Being that this is a mystery and the reveal is supposed to be a surprise, it’s understandable how things turned out. Nonetheless, the heat was missing something, there was so dearly little of a succubus in this work that Natasha could have been revealed to be a murderer and the ending would have felt the same.

The work does need some more editing, there’s oddities in the dialogue at times which reads oddly. There’s a lack of emotion at many points where there should be as well. Perhaps the largest issue is a shifting of tense which happens almost constantly throughout. But it is the conclusion, where the truth is revealed which needs more. It’s far too short, too clipped and the interaction between Natasha and Damien reads as something akin to a porn movie in a rush to get some dialogue out to justify what happens next just before the story gives way to the sex.

The mystery is quite good, the erotica has heat, but as a story about a succubus, there’s quite a lot to be desired. The work also could use another editing pass to bring some needed life to the dialogue and clean up some tense issues that keep cropping up which take something from the story as a whole.

That said, the ending leaves quite a lot of questions, and perhaps that story needs to be told as well. I can take an educated guess at what happens next, it’s fairly obvious, but nonetheless, there’s a story to tell there.