The horns are the least of this costume’s issues really… 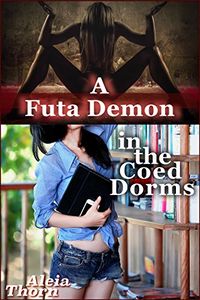 A Futa Demon in the Coed Dorms by Aleia Thorn

I enjoy a story where a good mystery is at the core of the storytelling. It’s a challenge to tell a story in which the reveal is left to simmer as long as possible before all is told. Of course, sometimes the book title tells a large hint as to what’s going to happen, or the book summary does the same. But within the context of the work, keeping the characters guessing in a believable way matters.

However, there’s always the issue that happens too often. There’s a tendency to write succubi and incubi, regardless of their physical forms, as being creatures of single minded evil. That tends to turn me off and in the midst of a mystery, that bothers me. Avoiding that literary trap can make the difference between something average and something far better than that.

Ten years ago an incubus tore Alexis’s happy life apart. For half her life, she’s harbored dreams of revenge and prepared for the day payback would be possible. She’s studied the lore and trained every way she can think of.. But for ten long years she hasn’t seen a single trace of a demon…

But now strange things are happening in her college dorm. Young women are behaving way out of character–the most squeaky clean of students suddenly and publicly indulging in lewd and depraved acts. Alexis has been waiting for this moment for years. It’s obviously the work of an incubus, a demon who steals souls with the promise of carnal ecstasy beyond imagination. She’s read the books. She has a holy water arsenal locked and loaded and the willing assistance of her timid roommate, Darby. She’s more than ready to finally kick some demon ass!

But something far more dangerous than a mere incubus is stalking their coed dorm. Will Alexis and Darby discover the truth before it’s too late? Or are they doomed to a night of rough pleasure so intense it’ll cost them their very souls?

Over the years Alexis has been searching for revenge on the incubus that ruined her family. Now she sees evidence of them returning and it’s up to her to protect her friends. But the past isn’t always prologue and having tunnel vision can cost Alexis everything.

The strongest part of this work is the mystery that unfolds around Alexis, it’s well thought out, there’s a good deal of plotting and scheming that worked really well overall. The characters are interesting and as bit by bit things turn in bad ways, they aren’t completely impossible or have that B-movie level of characters making mistakes that happens too often.

The erotica runs hot and cold throughout the work, a reflection of what is happening and how things turn out. It doesn’t really overcome the plot or mystery, but at times there’s a distinct two-dimensional drive in what happens. Some of the moments are very porn-like and when the succubus is revealed, things are pushed that much further into the realm of being over the top when they didn’t really need to be. As an aside, the succubus flaunting the size of her package was the point where I rolled my eyes and found myself caring less about what happened next.

The succubus, when she’s revealed, is so dearly stereotypically evil and single minded that everything that came before felt almost meaningless. Futa or not, evil for evil’s sake doesn’t interest me and she turned far too much so for really no good apparent reason.

It’s a problem because the leading up to her reveal offers the possibly that she has a plan, a reason for why things are. When that moment comes in the story, it’s less about why she did things than the belittlement of Alexis followed by what can really only be described as ever the top fantasy with little thought as to how wrong the moment reads.

Setting aside the succubus herself, at least personality-wise, there’s so much else that’s written well, the plots are very good. I liked Alexis’ history, what drives her and why. I feel like the work is about thirty pages too short in how things develop. There’s a rush at times to get from one event to the next, not giving a lot of time to manage the story effectively.

The ending is where things don’t work for me as a whole. It’s too rushed by far and it really didn’t need to be. Given the time spent in the balance of the work to tell Alexis’ story and tie the threads together, it would have been better to allow the succubus to be less stereotypically gloating. It just didn’t work, the reveal was too abrupt, and when the story ended, it left something wanting.

There’s a clear path to another work in the ending, whether or not the author takes that path we’ll have to see. But overall it’s what comes next that makes me wonder and being that seems to suggest something about Alexis, I think that needs to be explored.

The mystery is told well, the plot and characters showed a lot of promise. It’s a shame that the succubus doesn’t offer the same. She had promise, but the ending didn’t allow a real building up to happen which took away something from the aftermath as well. When she was human, she was a lot more interesting overall, if that had been more effectively been transferred to her other side I think I would have enjoyed the story a lot more than I did.