A cute Morrigan cosplay, but isn’t there a wig missing?

A Review of My Flatmate’s Futa Friend by F. J. Kaye 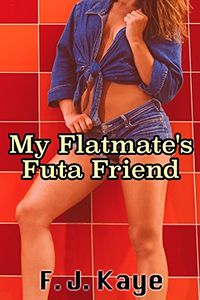 There seems to be more and more stories appearing about futa succubi of late. I don’t mind this becoming a trope, it can be quite hot and the stories can be interesting. Where the problem comes is when a character is said to be a succubus, and then really isn’t.

It’s not enough for the dialogue to mention they being a succubus and then move off that theme towards they being futa as well. That leaves a lot to be desired, much story left unsaid. Heat is part of a story, the balance comes in explaining who the characters are and why things happen as they do.

Cass won’t admit to herself how much she just wants to lose herself in one night of crazy lust. Girl, boy, it doesn’t matter.

When her roommate Sarah’s female “study buddy” decides to drop by without warning the two girls are left unattended. There’s something that’s not quite human about her roommate’s friend and it’s driving Cass mad. Just how far will she go with this flirtatious femme? How much can Cass learn about her own body with only a few afterschool lessons?

Cass knows her roommate is very adventurous when is comes to sex and while that causes her to be embarrassed, there’s one visitor that she can’t get out of her thoughts. Finding herself alone with Eris, the woman that haunts her, Cass finds out that Eris isn’t human, she’s a succubus and a futa at that. What comes next is exactly what both of them need.

Overall the work is a hot flash with a fair bit of character development and story telling. There’s an attempt at constructing the framework of the moment, telling the passions that the two characters have and it is, overall a good start. But the singular issue with this work is that everything is rushed, the story moves at breakneck speed and there’s no time for telling more of a story.

As such, this is less a story about an encounter with a succubus than it is with a futa. As such, there’s really nothing told about Eris, other than her sexual prowess and little more. She does tease, she gives Cass everything she wants, there’s no question, but there’s just something missing.

The dialogue seems odd and while some of that comes from the awkwardness, it still is something I stumbled over from time to time in the midst of the erotica. The unevenness of the storytelling asks for another editing pass at least to add something to the telling. Perhaps the single thing that missing the most is time for the characters, both Eris and Cass to tell more of themselves than they do.

Overall, there’s heat and two interesting characters. The issue comes in the rush to tell the story and the lack of explaining just what Eris being a succubus means in this universe. That matters, overall, and that is what I wanted to know more about, but didn’t see that being paid off in the storytelling.

As a story about succubi, there’s very little here save for the idea. Eris’ character offers a story to tell, but never is because of the focus on the erotica and not the need to tell a story much beyond that. Dropping a character into a story and then not telling something about them is a problem as it leaves a lot of story untold.