The Morrigan costume is nice, the foot fetish is different

A Review of Snatched by a Succubus by Asherah Lexus 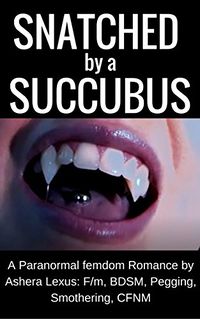 Snatched by a Succubus by Asherah Lexus

The thing about stories which involve succubi is that there’s a point where the succubus herself really needs to be more than a shadow regardless of her teasing nature or otherwise. By that I mean that in some stories the succubus is described but once, mostly in passing, and then she’s in the story, but not so much so.

There’s a disconnect between the need to tell a story, to focus on the main character and allow for the succubus, who drives the story onwards, to be part of things. Smoke and mirrors is one thing, it can add to the mystery, but at the same time not detailing that aspect of the succubus leaves something missing I think.

Waylaid by a storm whilst backpacking through Transylvania, Dave seeks shelter in an abandoned manor-house, delirious from the cold. He wakes weak and disorientated, unable to find his clothes or pack, and trapped like a rat in a cage within the ancient dwelling.

A sinister feminine force seems to stalk him through its corridors, and creepily, the dilapidated building begins to repair itself around him. At last, an ebony-haired beauty presents herself, watching lustfully, licking her lips, and telling him tales that must be the delusions of her mind. She takes him captive, depriving him of his clothes, and forcing herself upon him. She must be crazy, reasons, these must be delusions of her mind …

They simply must … mustn’t they?

Dave finds himself at the end of his rope, ill prepared for the adventure he started out on. The world is against him and having no other options the sight of an ancient building gives him hope to survive. But the dark woman at the door has been waiting for him, and now he is hers.

Overall there’s actually very little in the way of erotica in the work. That’s not a bad thing really because there’s a lot of time taken to construct the story, tell of what happens to Dave and his discovery that the darkness around him is so very real. There’s a good deal of mystery that surrounds that, the shifting of realities is well done as a whole. I liked how the truth of the succubus, as it was drawn out, made sense as well.

But the succubus, who has no name, though that is an important part of the mythos that Dave discovers, isn’t fully within the story. She appears fleetingly in her human form, more often in another, and while that allows for some fetish erotic aspects to be told, I just didn’t find them attractive. They are too rushed, glossed over slightly and being so the aspect of exploring those fetishes doesn’t happen. Similarly, when the succubus speaks, she’s not really saying much of anything, her tone is more of a cat playing with its prey. Her tone, and how she refers to Dave is a clear point about this.

The writing is good, there’s only a few minor issues with grammar and spelling, but nothing terribly distracting. But again the erotica seems to be missing heat, the mystery needs more fleshing out and most of all, the succubus herself needs to be part of the story whether in revealing her past, her needs or how things came to be. Missing pieces to be told which would make things far more interesting and complete as a work if they happened.

Overall I thought the story has a unique aspect of succubi to examine, though perhaps the story might have given the succubus herself more depth in character than she is. There’s a good deal of mystery of why things turn as they do and I’d have liked the work to explore how things came to be.

It’s little missing bits of story that bother me, and they really shouldn’t. That said, how things end, the story could continue and perhaps it might do so.