Possibly one of the cheapest looking costumes ever…

A Review of Mate of the Incubus by Crystal Santacruz 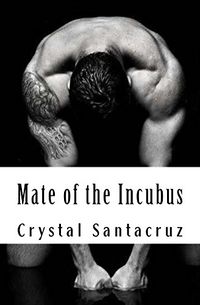 Mate of the Incubus by Crystal Santacruz

Today’s review is going to be very biased for one simple reason. There’s a serious disconnect between the ebook version and the paperback version of this work. About 140 or so pages to be exact. Beyond that, there’s some more things that bother me, but that, will take a bit to explain.

Zepher is no ordinary being, he is King of the Incubus. He is a demon that invades the dreams of women. Zepher had many conquests, but he has the desire to settle down. When he meets Christina, he is intrigued. However, he is not the only one that wants her. The King of the Incubus, will have her by any means necessary.

Zepher finds that not all human woman fall for incubi. But there’s something about Christina and he will have her. The problem is that someone else might have gotten there first.

Zepher is, to be blunt, a overbearing, single-minded, two-dimensional character with the appeal of a rock. There’s simply nothing attractive to him shown, and there’s so little depth to him that he’s barely a ripple in the story for all of his bluster. Similarly, Christina is a character needing a soul and the third main character is even less fleshed out.

The work is a difficult read from the beginning. There’s tense changes, the tone is clipped, as is the dialogue. There’s not a lot of depth in the writing or characters either. Everything is scattered and uneven, seemingly reflective of a lack of editing. But that’s not where the problems end.

I can’t say what the book is like honestly. I can say that there’s a need to fix the editing, the dialogue and the characters at least from the eleven pages that I can read. There’s nothing really attractive in the characters and given how things are written, I’m unsure if I’d read the entire work. It’s interesting that this work has a single review, which you can see if you follow the link above, and it’s gushing about the author writing amazingly.

Perhaps they do, perhaps they do not. The ebook isn’t a good way to judge that. But what there is doesn’t give me a lot of confidence sadly. The vast majority of the work is missing in its ebook form, and as such there’s not even an entire chapter offered. Considering the cost of this work, the author would be well advised to have the technical issues sorted out because this simply doesn’t work as things are.

I’m being very kind with that pitchfork, mainly because I’m going to give the benefit to the author that there’s more here than there is. If this is all however, I can’t get the cost back, steep as it is, nor can I retrieve the time spent in reading and mulling their work over.

If the entire work finally appears on my reader, I’ll revisit this review to be fair. I’m not expecting much, eleven pages in, but we’ll see. Ideas are wonderful things, but it takes another to make the ideas blossom as they should.