A Review of Magical Fun & Demonic Charm by Elizabeth Violet 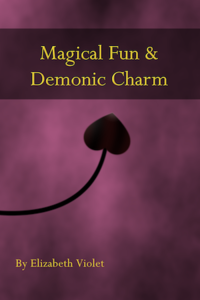 The stories about Succubi that I love the most are the ones in which the succubus isn’t what you might expect her to be. She can be a little evil, though I prefer naughty of course. Her personality can be delightfully seductive, which I think matters a lot actually to Succubi as a whole. But the one thing that just has to happen is that she’s not, at all, stereotypically an “evil succubus” because that’s boring and it’s been done far too many times before.

Discovering a short work in which the succubus is a delight, the story has soul and what happens at the end just makes me smile in ways that only those that know the Queen herself can understand. After all, there’s always time for a sweet treat… after a sweet treat.

A man named Grant finally finds time to go hiking. And when he wakes up to a mysterious voice, he goes to investigate, and finds himself face to face with a strange woman in lingerie with a tail, wings, and horns. While she ultimately wants one thing from him, this succubus is also quite the tease. He winds up charmed by her magic and eventually drained of energy by her supernatural wiles, but at least he’ll be fine in the morning.

Grant goes on a hike to explore and along the way he discovers a mischievous succubus called Nymlia who sees him as a delicious treat. There’s no resisting a succubus when she’s hungry when she winks, smiles and does… everything Grant fantasies about.

That’s the thing here, overall. This isn’t a story of darkness wrapped in wonders of sexual delight, there’s a connection between them both. A feeling that while the story is so dearly short, there’s something that might come next to tell more. It’s the promise of the characters in the end of the story that ties things up well and just made me smile.

The erotica has lovely heat, as I’ve noted, the story, again while short, does tell a full story, not leaving things lost along the way. There’s a focus to Nymlia’s personality, her playing with Grant. It makes sense and it’s not so far over the top as to lose the playful sensuality that is built up over the story.

If there’s one problem, that is the work is so dearly short. There’s a path in the ending to follow that I’d love to see. Beyond that, the little plot points that Nymlia drops here and there just beg to be expanded on. There’s a history behind her, and Grant, it seems and whatever that is, I think telling more of that is what’s missing here. Well written, there’s nothing that took me out of the story, the characters I adore and Nymlia herself is one of a very few Succubi characters that I’ve adored this year.

It’s a shame that the author didn’t expand the story more, or turn the encounter between Nymlia and Grant into something larger than it is. There’s so much to love here, and so much is managed to be done with the story. It’s just the little teases along the way leave me wanting more than there is.

After all, how could I not love a story in which a succubus… bakes.