Time to Time By TeraS

If nothing else, the costume is a little shiny…

A Review of Succubus Autumn by Indigo Fulmen 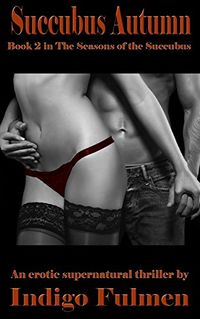 It’s been some time since the first work in the Seasons of the Succubus series by Indigo Fulmen was published and you can find my review of that work here on the Tale. Today then, the next work in the series in which things get not better at all.

There’s a thing about telling a story in which darkness falls and that is, at some point, there is a temptation by authors to push the boundaries and turn things so very dark indeed. While that can be understood, it can also bring about the question in a reader’s mind if they really want to see what happens next.

All it takes is one single moment where despair covers everything and all that remains is the loss and nothing more. That’s difficult to read and if there’s not a mote of light to offer hope, then what’s left?

Ava Hunter is a beautiful young woman with nine months left before eternal damnation claims her.

A death curse from an ex-boyfriend has left her possessed by a succubus. This succubus has two tasks: to drive Ava to any and all lustful extremes, and drag her down into Hell. Unfortunately for Ava, it’s very good at its job.

After three months of indulging dark desires, Ava struggles to find a way out of her express elevator to the Pit. She begins to understand the nature of the trap, but still has no way to avoid it. Worse, the power of the succubus increases with time and indulgences. The longer it possesses her and the more she gives in to lust, the more it can influence the world around her—for the worse.

And it is so very hard to resist, because part of her wants to give in to every dark fantasy.

Things just keep getting worse for Ava as time passes and the succubus within her delights in all of the things Ava does. But the darkness is only beginning to take hold and Enzaxiel can’t wait for Ava to see just how dark things can be.

Compared to the first work in the series, I can’t say that I found a lot to like in this part of the series. There’s too much darkness for my taste, there’s not a speck of hope to be found. Ava, as flawed as she is, is driven to madness by Enzaxiel and along the way there is a trail of destruction that follows her like a shadow.

While I understand the reasoning for where the story went, personally there comes a point were things go a little too far. Enzaxiel is evil, of that there is no question at all, but some of the events are pushing at the edges of my own sensibilities. I can accept quite a lot of things, but in this single work alone there are two moments which made me want to abandon the series and a third after which I was skimming the story.

There’s really no heat in the erotica that I could find, the encounters are a miss-mash of lust driven by the evil intent of Enzaxiel alone. Really this work is mostly about all of the pain that Ava can be sucked into and where that takes her. Not for one moment is there relief of any kind and even when a trickle of hope appears towards the end of the work, it’s so dearly lacking as to be almost meaningless.

All that said, the work tells a strong story, the plot never wavers and within its own frame of reference, everything that happens makes sense. There’s a lot of character development, more of past history is explored and there’s a seeming direction where the story will go hinted at. At the same time there’s so much weight pressing on Ava that she’s becoming less and less interesting and more two-dimensional with every terrible thing that happens.

The heat that comes from what Ava does at times, just wasn’t hot for me. It smouldered, trying to become a fire, but never had the spark. The soul of the book seems to be missing in his part of the series and I think that’s a real shame. Still, there’s a point to this, at least given this is the halfway point, there should be.

The ending was honestly the single point where Ava has seen her humanity fully and the one that brings that to her I think might be more than he seems to be. Given all that came before, I’ll hope that the author doesn’t take the easy route as seems to have happened with so many other characters in this part of the series and push them aside. There’s a story to be told, some of the plots are starting to come together. The question becomes if there’s something positive or if things just get worse from here.