Time to Time By TeraS

A Review of Pink by Misty Vixen 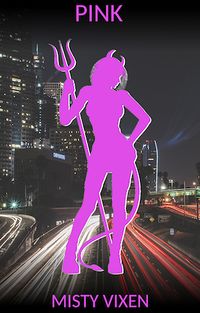 I’ve reviewed works by Misty Vixen in the past on the Tale, you can find one of them here and today I’ll be reviewing one of the author’s more recents works. What I particularly enjoy about the succubi the author tells of in her stories, is that while not all of them are nice, they are certainly naughty.

The succubi characters that appear in this author’s works have depth, soul and most of all, they are unashamedly succubi. It’s that part of them that I think the most of, in that the universe they exist in allows them to be not what they are, but who they are. Those are the most delicious of stories to read.

In a world where humans and mythical or magical beings, known as paranormals, live side by side, tensions can run high. Sexual relations between humans and paranormals isn’t outright illegal, and in some cities it’s considered normal, but for the most part it’s merely tolerated. Nick is an inexperienced human in his twenties. He’s never known a paranormal, and the first one he happens to meet is a woman who won’t stop staring at him at his local burger joint. When he works up some courage and decides to ask her out, (she’s seriously hot), he wonders what he’s gotten himself into when he discovers that she is a succubus…

There’s something that’s been bothering Nick for days now. She’s there on the other side of the restaurant, every day for a while now. He keeps looking at her and she does the same. Gathering up his courage, a hello brings Nick to meet Robyn. She’s smart, if as shy as he is, but still they strike up a conversation. A simple hello can sometimes lead to someone amazing as they both will discover for themselves.

The work is a hot flash, but it’s written in a way where there’s depth to the characters, time spent in setting up the story and carrying them throughout. The erotica has lovely heat, Robyn’s succubus powers are quite present, but at the same time there’s a real feeling of two awkward people trying to know each other. That’s both cute at times and dearly captivating in others. The erotica doesn’t take over the plot, rather it’s carried along with it. The two mix well, giving rise to a story in which both Robyn and Nick are feeling each other out and hoping that, somehow, things will work out.

Robyn’s personality and nature sometimes are at odds with each other, and in those moments when she takes control of the situation and moves things from “just a date” to “let me help you relax”. Most of the time that works, but occasionally the story rushes through those moments a little too quickly. It felt like there was more that should have happened, perhaps more from Robyn’s voice and narration, but that didn’t occur.

I loved Robyn’s view of succubi, of what she liked, how she saw herself. She didn’t act perfectly, there were moments of her being unsure, perhaps amazed in what Nick sees in her. That gave Robyn something needed in this story. There’s humanity in both characters, they both are trying to figure out where things are going and why. Nick’s internal monologue of doubt, excitement and realization reflect so well against Robyn and that makes how things climax and conclude so much hotter than things might have been.

The ending made a good deal of sense, but it was a little too rushed for my taste. Similarly, at times the story jumped from moment to moment, thought to thought and there was something missing in that. It didn’t take much away from my enjoyment, but it left me wondering about all of the little moments in-between where Robyn and Nick were trying to connect. I think, overall, that about another five pages of character development would have meant a lot.

If there’s one thing I dearly would have liked it would be that the dialogue had a bit more “soul” than it does. At times the characters voices in my mind seem rather flat and that’s a shame overall. It doesn’t really take away from how much I dearly enjoyed the story, it’s more than passion needs to reflect in the words spoken and it doesn’t quite manage to be.

I’d love the author to write about what comes next, I think that Nick and Robyn’s story isn’t over by any means. There’s the start of a D/s relationship in a way and that would be neat to see unfold. More so, some of the things commented on by both could be explored.

Perhaps the author will consider this, I do hope so because Robyn is one of the most delightful succubi that I’ve encountered this year. I’d love to see more of her and see how her character grows with Nick being in her life.