A Review of Halloween Party by Jess Bell 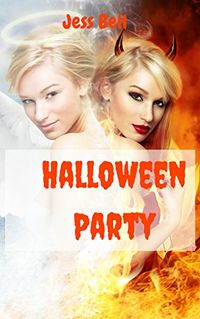 Sometimes the appearance of a succubus or incubus in a story is fleeting. They exist within the story, but don’t really do anything until the very end and then it’s far too late for things to happen.

It’s a shame because the idea of who they are and what they have done is a layer on the story itself, but if that doesn’t get a chance to appear, then what’s the point of the succubus or incubus appearing in the first place?

Carli is a witch. Not the kind who casts spells but the kind you want to strangle. But even witches like to have fun, and that’s what Carli sets out to do with her bff’s at her favorite club’s yearly Halloween Party. But how much havoc will she create in the meantime? How much sexy, naughty trouble will she get into? And who is the mysterious guy in the devil costume who seems to be following her around?

Carli isn’t an angel even if she’s dressing up as one for Halloween. There is such a thing as karma and when a night of evil acts on her part ends, there’s something waiting to take what she never paid much attention to.

The work is mainly centered on the main character Carli and how evil her personality is. She’s so very close to being a succubus in many ways, but she isn’t. She tempts, wrecks relationships and does just about every bad thing you can think of as the story tells. To say her soul is dark is a compliment to her really, which considering how things turn is very apt.

There is one character who seems like an incubus that appears, if fleetingly. He’s there at some points in the story, but really does nothing until the last few pages. It’s then that his real being appears, which seems very incubus-like all things considered. Still, there’s no development, no depth and no story about them. They are there to bring the story to a close in a very dark way and not much else.

The writing is good, the depths of Carli’s nature are told well. There’s not that much heart in the erotica and really there’s not much of that save for a couple of short scenes. Given the focus on Carli, it would have been nice to give the incubus some depth over the story, perhaps showing them driving events onwards. Otherwise it just wasn’t that interesting to me.

It’s not really a story about an incubus, it’s the telling of one soul’s destruction really. But the thing is there’s a hook at the end of the story that could have been used in the following books in the series. But they don’t and it’s a shame really. Carli might have made a bad succubus, if the story had gone that far. She didn’t manage to be a good angel.