A 1960s Succubus next door costume might be an idea…

A Review of Warped Futa Wishes by Mara More 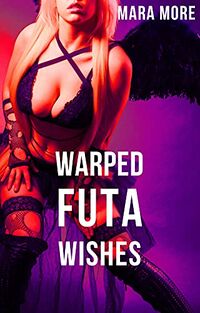 The thing about stories which have a futa succubus as one of the main characters, is that too often the story cares less about the story for the sake of the erotica.

It’s fine to build sex scenes into the story, to tell of what happens there, but when there’s glimpses of something more, and it doesn’t come to be, that’s disappointing.

Be careful what you wish for – you just might get it!
An evening of preparing for a romantic reunion is turned on its head when Marvin inadvertently summons a sultry succubus from the depths of hell, who graciously puts her affinity for enhancing sexual performance at his disposal. Bigger is better, as the old adage goes, but a carelessly worded wish leaves Marvin at the mercy of a domineering futanari with a rapidly growing tool and the balls to use it!
Will Marvin satisfy her otherworldly lusts before the night is over? Or is he doomed to remain in her service forever?

Marvin awaits his girlfriend to arrive home with the promise awaiting her of a romantic evening. But a discovered book tempts him with a promise. Summoning a succubus wasn’t what he expected, and now he finds that there is a cost to be paid.

Kelly herself is, overall, interesting. That’s mainly because of her attitude, the side comments she makes from time to time, and her overall presence through much of the story. I do like her, quite a lot, and more’s the shame that she’s not really developed more fully. There’s something about her sass and controlling nature that just fit the story well. But the story didn’t go anywhere with it when the sex scene started or when that was over and there could have been a bit more done with her.