A 1960s Succubus next door costume might be an idea…

A Review of Demon Sex by Nikki Orchid 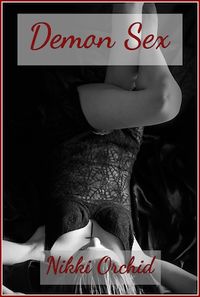 Sometimes a story moves far too quickly into the erotica. There’s a lack of setting up the characters, allowing them to tell a story before the heat and flash pushes the story into the background. Sex alone isn’t really that hot a story to read I think. Building a connection with the main character and finding oneself put into their position is where the heat comes from.

Telling about sex, regardless of what that might be, isn’t a story on its own. Erotica comes from within the mind and when there’s very little to latch onto, that’s a problem.

Looking to buy something fun for herself, Crystal enters a specialty shop called the Magic Emporium. She meets the young and handsome shop owner named Demetrius and learns that he is a demon monster. He has the ability to see her darkest sexual desires and make them all come true. She only has to agree to give her mind, body, and soul to him and his demonic underlings and pets for all eternity.

Crystal enters a shop and finds herself enthralled in mere moments by the master himself. Demetrius sees something he wants inside of Crystal and he has ever intention of making her see it as well before he takes her for himself.

Overall the work is a hot flash with a slim plot to carry things along. As well the characters are very two dimensional in their personalities and actions overall. Crystal just falls under Demetrius’ control and whatever personality she had gets wiped away. She becomes more of a vessel for Demetrius’ needs, both mentally and physically, which takes away something from the story overall.

Demetrius himself can be described as an incubus, though he never calls himself as such. Still, there’s enough in his enflaming of Crystal’s needs and the sexual hoops he places her through for incubus to be as good description as any other. He is single minded, having only thoughts of sex and in that sex there’s not much in the way of passion or emotion.

It’s that lack of emotion that bothers me in this work. The character’s voices are very monotone, never varying. The points at which there should be some kind of emotional voice, there just isn’t. The sexual heat I just didn’t find very hot. Beyond Demetrius himself, Crystal goes through a number of other encounters which read oddly, almost in a rush.

Overall the idea behind this work interested me, there’s a bare hint of mind control and a scattered of an incubus character. But that’s the issue here really, there’s a lot of good things to be written about but no focus much of the time.

More heat in the telling, more time spent in the seduction of Crystal would have helped a lot. Perhaps limiting the erotica somewhat might have helped to make the story read better as well. Ideas are a wonderful thing, but too many in one story tends to cause issues.