A Review of The Devil’s Daughter by Michelle Kopra 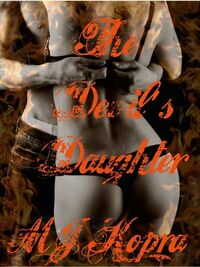 The Devil’s Daughter by Michelle Kopra

A review this time of a story in which the main character isn’t quite a succubus. That’s not really a problem, she has all of the hallmarks of being one.

That said, one isn’t all evil and one isn’t all a saint either. That is true of both sides and when they meet, it’s more a question of what one desires after all.

The devil’s daughter was just looking for a bit of fun when she met the sexiest angel she had ever seen. With his wings, tight T-shirt, and cowboy boots he walked into the bar and into her life. What started out as a smoking hot one-night stand, has turned into a race against a ticking time bomb. Can Rhia discover who framed her? Before the time runs out on them and the rest of creation.

Rhia is a daughter of the devil and she is all about lust. But there’s a point where happiness isn’t found in lust, it’s found in unexpected places.

The work is wonderfully fun, there’s a lot of funny moments that happen around Rhia. Her mother is especially fun and really any story where cookies are involved will bemuse me. Rhia has a strong personality and she’s very clear about who she is. She’s a bit less so with what she wants however. Still the encounter with Evan, an angel, opens things to something more and that makes the story more than it otherwise could have been.

The story is interesting, the characters are unique and they work really well in telling the story. But at times the story wanders, the dialogue sounds a bit odd as well. At least one more editing pass I think would have helped make things better. I’d have liked to more more about Rhia’s mom, her sisters, and something more of her past. It’s very much in the here and now, but without some understanding of how everything came to be, there’s a piece missing.

Rhia isn’t quite a succubus, she’s the embodiment of Lust and that was fun. The story is delightful interesting and while the ending is a bit abrupt and has a twist in it, the story was quite well done.