A Medieval Succubus for Halloween… It’s a thought…

A Review of Succubus Happens by Chelsea Laviguer 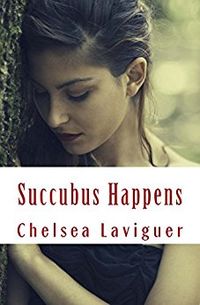 Teenage angst tends to be a common source of story inspiration. When supernatural beings are mixed into the story things tend to turn from bad to worse. Overall it does bring conflict and strife to the characters, which makes something for the story to build around.

But somewhere past the angst and fighting there’s other stories to tell and that’s what really becomes the story. A review then of a coming of age and power story that asks the question who one is.

Hidden in this small town of North Grove is a truth that’s been kept secret for generations. Daphne Martin quickly learns that she is a part of that secret. There is magic in the world and Daphne has to figure out how to protect the people she loves while also trying to find herself.

There’s nothing quite like the horror of moving into a new town and the first day at a new high school. You get grilled on your past and a lot more intimate things from those around you. But things get really troubling when Daphne finds out she isn’t quite human, she’s a succubus, and it seems that someone’s out to get her.

The work is a mixture of teenage angst, mystery and conflict that works well overall. The characters are unique, some of the supernatural beings don’t appear often in stories which is refreshing. The plot is a little scattered from time to time, the focus wanders, but when the story focuses on smaller things, it’s delightfully fun and an absorbing read.

The succubus of the work, Daphne, just barely has her powers appear during the story and when they do it’s fleeting and really doesn’t tell that much about her. Yes she consumes lust and other emotions, and no she doesn’t have horns or a tail. The thing of it is that because of how the plot progresses, she really never has a chance to begin to figure herself out. Part of that are the distractions from those around her, her love interest, Carter, also has a hand in that. The main thing is that Daphne is told she’s a succubus and then when she tries to get more information, that’s so little as to be a page or two in length.

Of course this is part of the mystery about her and that works well. But when she could really use her powers towards the climax of the story, they just aren’t there and that bothered me. There’s a certain amount of build up that just gets lost in the end to create tension, which works well, but at the same time, Daphne could have dealt a bit of pain to a certain female antagonist.

That brings a question that the story never really answers and it is why things turned out the way they do. There’s a mystery about several of the characters that’s left to interpretation and the questions that brings offer some really good story ideas, but they aren’t taken. Yes the work focuses on Daphne and what she encounters. That’s a start at least, but there’s so much left to be told.

The work could use one more editing pass to tighten up the flow of the plot overall. It also would have been nice to tell more about this story universe than there is. I feel like there’s a lot of dangling plot threads that left me wanting. There’s some questions about Daphne’s mom, a certain evil student left behind when the story ended as well. There’s a way forward to a follow on story and it would be nice to see that. Certainly Daphne has a lot to learn and wouldn’t it be interesting to see that? I’d think so.

A fun read, I do want a sequel as there’s so much left untold and unexplored. Most of all, there’s a question about Daphne and her mother, and possibly father, that I’d like to see explored.