In the Eyes of Prey by TeraS and her Adored Brother

So much red, but so little at the same time…

A Review of Taming the Incubus by Zoe Flik 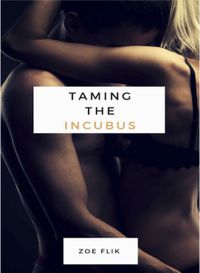 Taming the Incubus by Zoe Flik

In telling a story, there’s a certain heat which comes in the anticipation of what happens next. It’s interesting when a story tells of things not going as one might expect, that the power within the story is held differently. Dominance isn’t always a question of who is physically stronger, it is far more enticing when it is the strength of personality which rules the moment.

A review then of a work which, I’m sad to say, appeared but for a moment then the author removed it from sale. Nonetheless, passing over this work would be a shame as there’s a lot to like, more to wonder about and, in the end, the promise of something greater if the author took the chance.

He may be the one who slips into my dreams deep into the night, leaving me breathless come morning, but make no mistake, I’m not just his plaything—the Incubus is mine. Every night, he comes for me. When I don’t sleep, he waits and comes for me the next night, taking me in a hungry frenzy. He craves my desire and going without it seems to drive him crazy. But I want more than a shadowy apparition in my dreams, and I’m going to get it.

Tonight, I’ll stay up and wait for my Incubus again.

A woman knows what haunts her and seeks something more. She wants to know him, to see him, to be, at last, the one in control. Temptation eats away at her will, but her passion is bending as well. Who gives in first matters less than the realization that both are seeking the same needs.

The description of the tease which leads to their first encounter is wonderful. But I rather more enjoyed the first words spoken, the revelations each have. How the female character takes control, seeking her own sexual fulfillment takes the heat in unexpected directions. The surprise in the incubus, in finding her cravings to be as much as his own, is very telling as well. When the climax of the work appears, its not rushed, there’s a meaning, an expectation to it.

The writing allows the characters to have a soul, to be captivating. The story works as a narrative from the female characters perspective and when the last page arrives, there’s a feeling that the story comes to a completion well. There’s a needed closure, if not fully reveals and I enjoyed that.

But it is short and that’s the larger shame. There’s no names given, there’s not that much told from the perspective of the incubus as the female character relentlessly teases him. It is a full work, there’s no question, but there could have been so much more. The first time the incubus came to her, the moment she realized what he was. More so, the ending offers something which begs to be told but isn’t. It’s the missing parts which could have turned this pamphlet into a very solid novel, which are missing. That bothers me and seems so dearly a shame.

But as things are, as delightful as the heat is, there’s so much story left dangling, so many things to wonder about not told and it takes something away. The work notes that names have power, it would have been nice to put names to both characters and open them to us more.