In the Eyes of Prey by TeraS and her Adored Brother

A Review of Corrupted Desire: A Succubus Transformation Tale by L.M. Gregory 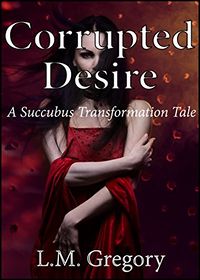 Sometimes a story doesn’t really have a succubus appear in an obvious way.

They hover around the edges of the story, push events and characters and when they have what they want, then they make themselves known. But sometimes the corruption the succubus brings into play means more than the succubus herself.

The path to hell for William begins with a desire unfulfilled and a woman who plays upon them for her own ends. Desires bound by evil intentions never come to good and when that evil needs a player, William has no option but to walk the path lad out before him.

The work is mainly focused on how William is manipulated by the succubus of the story Adrienne, the plans she ferments through him and what, over time., William is drawn into being. It’s less of a story about succubi than the corruption of a soul, Adrienne never revealing herself fully until the latter part of the work. There are hints of course, and each chapter’s opening monologue leaves little doubt as to what’s going on. But there’s precious little of Adrienne being a succubus to be found in the story except for the sex scenes.

The ending wasn’t unexpected, William’s fate being set from the beginning of the tale. It’s a bit morose, very sad, and it sort of made the story stop in its tracks and lose the drive it had prior. It was necessary, if to show how far William had fallen and how much he’d lost through Adrienne. Like the overall work, it was emotionally tepid and it didn’t hold my attention or interest which was disappointing.

This is a corruption story with very little succubus themes to be found. That is the point of course, but from the perspective of having Adrienne be something more than just evil, which is her only reason for existing, there’s a lot lacking. Desire and need are powerful things, but how they are used to shape the story and characters needed more depth than what appeared.