A Review of Orc Booty: Under the Orc Spell by Cecilia Chase

A Review of The Diary of Tessa Graves: First Entry by Raven Leigh 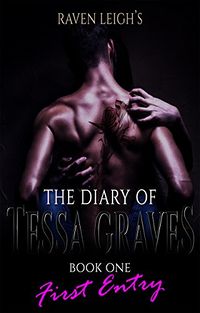 The Diary of Tessa Graves: First Entry by Raven Leigh

A review today of a work that first appeared in 2015 in a far shorter form. The author reissued the work, more than doubling the length, which added much to the story as a whole. There was a lot of gaps in the original work and filling in many of them I think has created a better story overall.

I might not like the main character as a succubus still, but I can understand her better and it’s that understanding that makes the difference by far.

Saying that someone is a succubus is one thing, it’s explaining them, getting to the character themselves and starting the exploration of who they are where things get interesting. Straying off into tangents tends to make a story that is forever trying to find itself. Focus does matter.

A dark, sensual and deliciously sexy urban paranormal “romance”. The Diary of Tessa Graves follows the story of a woman who discovers the shadowy truth about her origins and the darkness that awaits in her future. Gritty and raw, this series is meant to walk the line – breaking the boundaries of what might be considered taboo.

HEA? Please. This is Tessa’s world, and her idea of happy ever after has nothing to do with fairy tales.

Tessa Graves is not a woman waiting for the right man. Instead, she seeks out the wrong men for her own, sometimes deadly, interests. In book one of TDOG, First Entry, we get acquainted with Tessa and her rather tame beginnings. But don’t let that discourage you. There is plenty of story mixed with plenty of steam in this first installment of a planned ten-part miniseries.

At 18 years old, Tessa has finally hit full on puberty a lot later than her friends at school. The sudden onset of powerful sexual urges is driving her to the edge of madness. That is, until her estranged bad boy foster brother Thomas Reed shows up unannounced a few days before her graduation. Tattooed. Muscular. Mr. Tall Dark and Handsome college boy is too much to resist and Tessa’s ascension into womanhood is thrown into overdrive. Now faced with both primordial desires and terrifying nightmares, she doesn’t know how long she can hold back the tempest growing inside.

Can she overcome her taboo attraction to Thomas? Or will she give into the carnal demon awakening within?

Tessa is a succubus, one who is very self-assured in her abilities even if she doesn’t really understand them. Her story begins with the discovery of her sexuality and the effect she has on others. When one of them is someone she knows intimately, there’s nothing to stop her from taking what she needs.

The work is told from Tessa’s perspective and overall it’s very hard to like her as a character as she speaks from the present and tells the story of her past. The Tessa of the here and now is jaded, almost aloof, and overall has the personality of a shark looking for its next meal. It is a sharp contrast with her personality of the past, and as a whole I liked the somewhat more innocent Tessa than the matured Tessa. There’s just something about her that rubs me the wrong way and I think a lot of that comes from how cold she is.

As the past is told, we learn about Tessa’s life, her adoption, and the family she lives with, including an adopted brother. When her powers come into the fore, he, of course, becomes her target to sate her new found needs. This does provide for a means to draw the story forwards and tell of Tessa’s thoughts about the past and how it started her on the path to where she goes next.

It is made clear that Tessa feeds on men, and, at least her older self speaks of killing many of them. She also mentions that succubi like her are “unique” and “the top of the food chain” which tends to put a particular light on the story overall. As such, at least personality-wise, Tessa becomes very much a stereotypical succubus in her thoughts and actions and needs which seems a waste considering how her past played out.

What’s changed from the original work is that there’s a lot of time spend in fleshing out Tessa more, to explain herself but also to open up the world she exists in. By doing so, this overcomes a lot of her personality and makes her far more interesting than she was originally. The editing is better, there’s more focus on telling the story, of getting to Tessa herself and that makes a world of difference. She’s still a bit rough around the edges and it’s difficult to like her, but her story balances agains that flaw of character well.

A somewhat better beginning to the series with a character that isn’t as attractive as she really could have been. The question of who Tessa is gets more explained, more involved and that made the work a much better read. I’m still not enamoured with Tessa, I think there’s places for her character to go and that’s what is interesting by far.

Given that the author laid out a series of books to follow, one of which being the same title as the second work in the original series, I hope there’s more substance in the works to come, if they ever do, because there’s something interesting here, it’s just that Tessa doesn’t seem to know who she is and that’s a problem to overcome.