Succubi Image of the Week 503

A Review of The Diary of Tessa Graves: First Entry by Raven Leigh

A Review of Orc Booty: Under the Orc Spell by Cecilia Chase 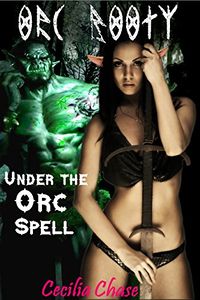 Orc Booty: Under the Orc Spell by Cecilia Chase

Succubi are, of course, creatures that appear in various fantasy gaming and story worlds. It’s very much a sexual trope, that if there is to be some kind of sexual tension all you need to do is have a succubus… or more… appear. Lately there are a lot of erotica books which have a D&D theme and with the appearance of succubi comes characters being transformed into succubi.

A book then this time, part of a series, in which the main characters are transformed into succubi and they try to come to terms with themselves. Mind you, of course it’s more coming than coming to terms.

How bad could it be to let orcs satisfy their lusts?

When an evil wizard curses them with a hunger for all things big, rough and cruel, the orc problems for two half-elven adventurer women are just beginning! But it’s not all bad; the strange pleasures at the sadistic hands of their orc captors seem to fuel their magic powers. All they’ll have to do is submit to domination, debased hungers and rough desires until their explosive sensual powers grow strong enough to break free.

Asher the lady-at-arms and Selene the sorceress are back exploring ancient ruins. This time when they try to rescue two more girl-adventurers they’re captured by the same orcs who ‘got lucky’ the last time. But the orcs are working for an evil wizard who wants to use the women to test his new toy – a magic horn for summoning demons.

Forced to be part of a ritual, they will soon find they’ve been given an insatiable lust for their orc captors. First captured, then cursed, now they are orc booty taken to be sold in the dark market, things couldn’t look more dangerous.

Sometimes events get out of control for a group of adventurers and when they find themselves bound and transformed into beings of lust for the pleasures of the Orcs that hold them, things might be getting worse. Betrayed by their new forms as succubi, the need within overcomes them and what follows is everything they want and everything they don’t.

The work is part of a series which follows the adventures, and misadventures, as they travel through a fantasy world of various mythological beings. In this work, the main event is the transformation of the characters into succubi. This reads more like a corruption, complete with blue skin, rather it is them becoming succubi.

The transformation is a bit thin for my liking as well. It’s very much a “blink and you’ll miss it” event, which then holds itself to the telling of the story which follows to reveal all of the changes the characters have been through. There isn’t much in the way of personality changes, the forces acting on them are their new bodies sexual needs. It’s also a bit odd that there isn’t much in the way of succubi powers which appear, though that’s mainly because the characters really can’t seem to think straight.

The work really isn’t one about succubi as it is a transformation story with a succubus tangent. Beyond that the work doesn’t really use the transformed characters beyond them being the playthings of the orcs. Given that this is part of a series, it’s understandable that the events don’t come to a close. It would be nice for more time spent in the struggle with their transformations, possibly even to the point of adding a lot of story to get from the transformation to where this work closes.

There’s something here, without question, but as for being a story about succubi, it isn’t the focus here.