A Review of Succubi Gone Wild: Madison by Lexi Jordan

A Review of The Fuccubus by Robert Bevan 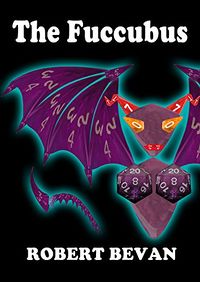 The Fuccubus by Robert Bevan

Recently there’s been a trope for succubi which involves characters being dropped into a Dungeons and Dragons universe and what happens to them. It’s interesting because the characters seems to know where they are and what’s going on, sometimes to the point where they talk about their scores and so on.

It’s a different sort of story and when that’s told well, the characters and plots can be unique by far. However, sometimes there’s too much focus on the events, telling them as if the characters are sitting at a table and playing the game rather than actually being in the story. It’s also a problem, on occasion, when the succubus herself isn’t much more than a paper-tiger and acts far too stereotypically evil for my tastes as well.

It’s the time-honored classic formula. Boy meets girl. Girl invites boy, and four other dudes, back to her place. Boy thinks it’s weird, but agrees because girl is smokin’ hot. Girl turns out to be a demon who wants to suck boys’ souls out through their dicks.

A group of adventurers are hanging out in a bar when they are approached by a woman with an offer they can’t refuse. But the offer comes with strings attached and when those strings are pulled the adventurers find themselves being the toys of a succubus with one thing on her mind.

The work has a very strong fantasy-adventure feel to it, tilting in many cases towards a Dungeons and Dragons level of minutia at times. There’s some really well placed humour, some of the actions scenes are too funny for words honestly. There is but a scattering of erotica here and there in the work, as well as an underlying mind control theme at some points. The number of in-jokes and asides becomes a little overwhelming at points, but overall the work is written well and uses the setting and scope of the characters and situation really well.

Kristanya, the succubus of the work, seems sadly underused for the most part. She’s not really much more than a thinly created one-dimensional character with only one goal in her mind. That’s a little disappointing because her first appearance seemed to offer something more than that, but when all of the characters fall into her orbit, she’s single-minded and rather not that much creative in what she does. Kristanya is a little too much the gloating fiend that uses others than a succubus seducing others. She’s a bit too much the sex-driven succubus that needs her meal more than being in control of what’s going on around her.

That said, the dialogue she has does work, there’s some really quite telling moments through that. But it’s not enough to overcome the story in how she draws the characters in, then fades out to the background throughout much of what comes afterwards. Kristanya tends to play characters off each other, uses her mind control to influence them, and then takes what she wants. She also tends to be more of a monster, fighting as a whole than being a seductress as she really needed to be. It’s there at the start, without question, but soon after there’s nothing of the seductress and all of the stereotypical succubus instead.

The work is written a little oddly in that the dialogue makes a lot of references to stats and rolls and so on. That’s part of the series itself, but at times that drove me out of the story and it shouldn’t have. This reads very much like an encounter and the dialogue much as if the characters were players directing themselves into action. It works, to an extent, but it’s odd nonetheless.

Kristanya is rather stereotypically evil and there’s not that much told about her. She’s more of a means to an end and not much more than that. It’s a shame that with all of the humour, the teasing, the dialogue, that she didn’t have a larger role to play.

Still, the work isn’t so much about her as it is about the other characters and what happens to them. In that respect there’s a lot to like about how the story is told and the delight in how things were brought about. I just would have liked Kristanya to be more of the character that she began the story with rather than the character she became by the end.