A Review of The Fuccubus by Robert Bevan

The Bet by JHB

A Review of Succubi Gone Wild: Madison by Lexi Jordan 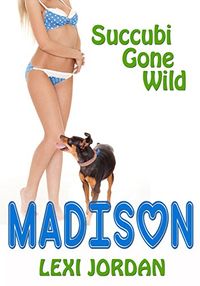 From time to time I review works about succubi that, for whatever reason, aren’t available any longer. The reason for that is, of course, the SuccuWiki, and the thought of trying to be as complete as possible. That said, the work I am reviewing this time might well be one of the shortest lived works I’ve ever reviewed. The work isn’t available any longer, the author’s website does not exist either. It’s a shame really because the overall idea of the work is really interesting. The issue becomes the erotica being just slightly over the line into something that’s taboo as a subject.

Being a succubus does not mean you aren’t who you were. Your past matters, your life matters. Sex might be all that you care about at times, but then, given the right partner, the needs felt might be something that opens your eyes to the truth.

When three friends cast a spell to obtain eternal youth and beauty, their wish is granted. But there’s a cost. They must indulge in their deepest desires or starve to death no matter how dark those desires might be.

Madison had everything she wanted in life; wealth, beauty, popularity. When one of her best friends wanted to do a spell, she joined in thinking it was silly, slumber party nonsense. Little did she know that her life would change forever. Cursed with a hunger she can’t control, she turns to the person she trusts most in the world, her step-brother, Logan. But will the darkness inside her lead her to harm those she cares about the most?

Madison finds herself roped into trying some magic by a good friend. But while she thought it was a lark, it turns out that they made a deal with the incubus king and now the three of them are succubi. Now Madison’s problem is that she needs something, someone, desperately and when she discovers who that is, the confusion mixed with her needs leaves nothing but a mess behind.

The work is a short hot flash which mainly focuses on Madison as she tries to deal with the changes she is undergoing. The heat comes from three encounters which work well enough, if seemingly being a bit quickly passed over at times.

The work is very short and as such there’s a lot of things that aren’t delved into, explained, or considered. For example, at one point Madison realizes what it means to be a succubus, what her future holds, and in that moment she had a break down over that realization. But rather than spending time giving her character more depth, there’s a rush to move on as her needs overcome her once more.

That, at its core, is the issue with this work. There’s little time spent in developing Madison as a character for the sake of rushing headlong into the next piece of erotica. There’s no time spent in having her learn about being a succubus, nothing told about trying to cope beyond her cravings. Even a reflection of her situation is glossed over and that shouldn’t be. It’s a shame because the storytelling is very good, there’s delightful humour, the characters have some really interesting personalities as well.

I loved the humour, the storytelling and overall the story just appealed in many ways to me. But there’s a real lack of there being more to the succubus aspects of Madison and her friends than just their needs being fulfilled in any way possible. It’s a shame that there wasn’t more time spent in exploring that aspect of their transformations. It’s a shame that the story really only had one point when all was said and done.

I’d have liked to have similar works about the other two characters who where transformed, what happened to them and how things turned out. Sadly, the work is no longer available and it seems to be unlikely that anything further will come from this.