A Review of the The Devil’s Dance series by April M. Junisdottir 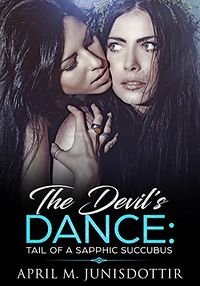 Character development matters and that isn’t just the main character, it’s everyone that appears in the story. Saying a character is a succubus, or a demon of lust, is just a sliver of their story. Giving their name is but another. Ensnaring their prey, in all of the delicious ways that can be imagined, can be a delight. But without something more that they are sex incarnate, I feel like there something missing.

A review then of the first two works in the Devil’s Dance series by April M. Junisdottir, which I hope are but the opening to more to come. The two book series, so far, consists of:

Esther Galil’s best friend is injured a car accident. The band she’s lead singer in is spinning wheels and going nowhere fast. Her life feels like it’s falling apart. Until one day her mysterious elderly neighbor offers her a book of old rituals which she claims can solve all of her problems – at a cost. Esther’s virgin body will be given over to a demoness of lust. Esther told herself in the darkest hours of the night that she didn’t believe in magic or spirits… but desperation can make a woman try anything and everything. And as she recited the ancient words of the Sumerian ritual, a distinctly feminine form emerges from ritual circle, cast out from the darkest depths, wreathed in fire and ash… and hungry in a way that she would *make* Esther love.

The second book is:

Esther Galil never imagined her life would take such a crazy turn. One day she was just a singer in a rock band going nowhere fast; the next, her best friend ended up in a car crash, her elderly neighbor told her to make a virgin sacrifice, and she ended up the vessel for an ancient Sumerian lust demoness! The demoness claims she can solve all of Esther’s problems, and starts by healing her friend… but demands her body in return, over, and over, and over again. Esther wants to hate it… but she can’t. She needs it. And every time the demoness demands more from her, she loses a little bit of herself to the raw, primal, aching lust deep within her…

Esther has but one wish, one hope, one desire. Her only friend has been in an accident and is not expected to live. But there are other means to save the day, if she’s willing to do so. Summoning a demon of lust isn’t the best of ideas, more so when the price to be paid is sharing her body with a creature of lust. Sometimes the best of intentions leads to unexpected things and along the way they also can lead to discovering something about oneself.

Overall the series so far has been a study in what Esther will do, regardless of the cost. Her disbelief in the possibility offered, at first, was told really well, but then there’s kind of a collapse of the impossibility and when she’d confronted by Mina, it’s clear from the start that Esther is well over her head. But that doesn’t seem to matter much and sealing the deal happens in a heartbeat. Once past that initial encounter with Mina, having felt her power and being at Mina’s mercy, the story moves on at a very fast clip. In doing so some of the details are skimmed over, or are left to be resisted later on.

While it’s clear that Mina is a demon of lust, or a succubus, she’s more of a tease, a devil on Esther’s shoulder. The detail about Mina comes to a little hint of her physical nature, the need she has of drawing Esther into all sorts of sexual encounters and controlling her though them. But as for who Mina is, why she answered the call, and most importantly, what she really wants isn’t told. There’s far more focus placed on Esther’s sexual encounters overall.

Those encounters are deliciously hot, the descriptions have wonderful heat. I thought it was well done in how Mina slips into Esther’s thoughts, pushing her onwards, giving her direction and how things play out. The heat isn’t over and done quickly either, there’s a good time spent in setting up things, drawing the moment into being and beyond. The balance between story and heat is, overall, well done, but nonetheless, there’s a feeling that something’s missing in the storytelling and part of that comes to Mina herself.

Over the first two works Mina is a presence, a force, which presses upon Esther. She constantly teases and enraptures her. A distraction in one moment, an inescapable need in another. But even as Mina is a driving force in the story, I didn’t feel that really all that much time was spent in telling her story. That’s a missing piece of the puzzle. There are some hints, but not nearly the explanation that I’d have liked to see.

There’s a feeling by the close of the second work, that this is the opening of a longer series, and I hope that it is. But the works so far are very short and that hurts the storytelling I think. At times there are info dumps, scattered bits of information, that could have been used to tell more of the story. Hopefully in the following works that will happen, because it really needs to.

Lovely heat, really interesting characters and an overall story that I think works quite well. But with some more time spent in telling a deeper story and adding more to the heat, I think there’s something more to be made from what’s come so far.

It’s unclear if there will be a third work in the series, there’s no note by the author of there being one. I will be looking out for such a thing however. There’s a really good story to be told, and I think it will be if the author takes some time to slow down and expand on the characters, their pasts and their own desires.