A Review of A Magical Reckoning: Five Stories of Supernatural Betrayal by N. R. Hairston

A Review of MythU – Episode 1: Come Inside! by Cunning Kimm 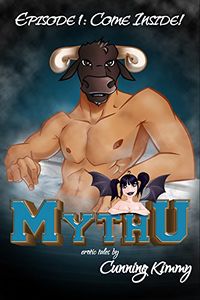 In telling a story there needs to be a few things made clear. One of the critical ones is how the main character knows certain things, or comes to accept them. It’s a bit confusing when they just “get it” from the start and the story presses onwards. Telling a story means, much of the time, explaining why things are and how they came to be. Missing out on that can be a little concerning when the work begins the telling of a series.

What would you do if you received a scholarship to a college that doesn’t exist, where the students and staff are all creatures from myth and folklore? If you’re the only human? If these same creatures want you, want to do things to you that you’ve only dreamed of? From the moment she steps off the bus and into the mist, Lisa Swallow must answer these questions for herself as beings beyond belief keep trying to get into her pants, or more accurately under her skirt. Or is she trying to get into theirs? Welcomed by a succubus, Lisa jumps head first onto a rollercoaster of sexual awakening where her every hidden fantasy—and even some she’s never considered—is fulfilled.

Monsters, and faeries, and Gods… Oh, my! Welcome to MythU.

Lisa receives an invitation to attend MythU and upon her arrival discovers there are succubi and other mythological beings all around her. But there’s little time for wonder when being the only human on campus means that she’s the centre of attraction to all around her.

The work is a cute story that almost entirely centres on Lisa being placed into all sorts of different sexual encounters with different beings, the first of which happens to be a succubus called Priscilla. There’s not a lot of time spent on building up a lot of back story or taking the time to expand on the characters much further than some basic information before the erotica takes over the story and all else is pushed to the side.

Priscilla herself, as an aside, is the student representative of MythU and she’s a delightfully forthright and to the point succubus. Her personality is wonderful, there’s a real mischievous nature to her and I think that really worked well. While the erotic moments between Lisa and Priscilla had lovely heat and a little bit of succubus temptation mixed into the telling, there’s really not much told about who she is, where she came from, or anything really specific. Lisa’s sexual needs, driven by Priscilla being with her, drown just about everything else out. Even when the encounter ends, or seems to, there’s no rest for Lisa and she’s drawn into further sexual adventures.

One might expect there’s a fish out of water theme with Lisa, but there really isn’t. She might be completely inexperienced sexually, but there’s a neat little advantage she has that made me smile and makes things far more interesting than they otherwise might have been. But that does ask a question about why Lisa is there, why is it that she’s wanted by so many and how it is that she came to be at MythU. Those questions aren’t explored, which is a shame, but there’s something a little more confusing as well.

Lisa seems to be completely at ease with encountering Priscilla and everyone else there. It’s not explained how she doesn’t seem shocked or confused about what happens, more so, how it is that Lisa just knows that Priscilla is a succubus without being told about it. There’s a hint of why that’s explained, again which has a lot to do with her sexual knowledge with having no experience, but it’s not well told.

Overall, the work gives little in the way of setting up the story and series before rushing to the erotica. It’s a bit of a shame as I think everything that happened in this first work could have been split across two or three books allowing for more time spent in setting up the universe, explaining how things are and why. For me, it’s the common problem I have in that erotica alone isn’t telling a real story. Here, that’s a real problem as the universe really needs to be explored more, the setting laid out, the characters given more than to tell their name and then be entwined with Lisa.

The one problem that needs to be dealt with, overall, comes to just why Lisa is so attractive to everyone at MythU, why she was asked to come there and most of all, there needs to be some kind of telling of how things came to be and why. I love the characters, Lisa especially just for how accepting she is of everyone and everything around her.

In the same way, I dearly love Priscilla and I really hope there’s going to be more told about her than the thin bits of detail that has been given so far. Still, the story isn’t about Priscilla, it’s about Lisa and with so many questions left unanswered, the series has a lot of story to tell. I really hope that it is told and I hope, in its own way.

I think there’s a good series to come from this work, if there’s some time spent in telling more story than erotica going forwards. Some that know me will understand when I say there’s a bit of an Mtech feel to this work. It is its own world of course with its own rules and characters of course. Hopefully that will be told and make this more than just how many different ways that Lisa can be seduced, or be the seductress.