Lose the cape and this might be starting to be Deluxe

A Review of Damned In Glam: Metal Magic by Brian Barr 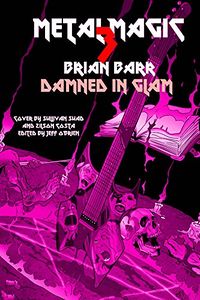 Having a succubus appear in a story isn’t quite enough. She can be evil and do evil things, but if she’s not much more than that, really anything could take her place. The reason why she’s there, who she’s ensnared matters. She might not be the focus of the story, but she should have some kind of presence beyond a whisper.

Knowing her name and a bit about her past is a start, but then when the story takes a turn and she becomes so very present in the story, wouldn’t it be nice to know more of the backstory than some gloating and evil giggling?

In this final installment of the Metal Magic series, a glam rock musician assumes a demonic identity for his stage shows, which leads to dire results.

The book summary is really far too short and tells not nearly as much as it should. I think something better might be: Evil can be seductive and beautiful, seeking those that wish for greatness and are willing to pay the price. But sometimes that price is more than just one soul, one song or one moment. Sometimes it can be something truly evil.

The story is told from the main character’s perspective for the most part and being so it’s more reflections of their past and what brought them to the moment they find themselves in. This works quite well, but at the same time, there’s really not that much in the way of character development for those he encounters, especially the succubus of this story, Celeste.

Celeste is on the edge of being stereotypical as a succubus, but there’s really not enough seen of her to define her character really well. Her appearances are fleeting, she’s more of a whisper, an idea much of the time until the climax of the work comes to pass and she finally appears out of thin air. It’s a shame really because there’s some hints of her story told, even if that’s barely so. It’s those hints that I really would have liked to know more about. She speaks of Lilith, about others summoning her, and those stories I think are every bit as interesting as this one is.

But this work isn’t about Celeste herself, it’s about the main character falling into the horrors he creates, the things he does for Celeste’s will. There’s a fair bit of horror, but it isn’t so much detailed as it is mentioned in passing now and again. There’s a fair level of mental anguish and pain told, the main character battles against himself and what he’s been entrapped with.

The ending is a little too fast, there’s no real closure for the sake of the horror aspects which come into play. Similarly the epilogue feels a little lost, almost an afterthought for the sake of putting a little plot twist into things. It does lead towards another story about Celeste, without question, should there be a will for the author to do so however.

Overall the work could do with another editing to clean up some of the dialogue, to expand on Celeste and what she’s after more perhaps. Certainly I think more time spent with the main character in the clutches of Celeste would be nice to add some depth to her character and explain more about why the main character took the path he did.

There’s not nearly enough of Celeste being present in the work and that’s a bit of a problem. The horror is a little over the top, the characters have depth and a past, but given that Celeste is so important, she needed to be more involved.

Perhaps there’s a story to be told in her alone, the ones she’s tempted and taken over the years. I think that might be the story to tell in the wake of all that happens here.