A Review of Temptress by Xandra James

A Review of Coed’s Hot Futa Wish by Reed James 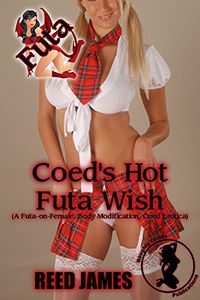 I’ve reviewed just about every one of the works by Reed James that has a succubus character appearing in them. Sometimes they are the focus of the work, sometime not so much so. This time on the Tale a review of the first work in the Succubus Cafe-Futa series in which there is a succubus, but that’s about all that I can say about her at least so far.

The thing about a character that appears in several series is that one shouldn’t assume a reader will know who they are and how things work with them. It’s a little troubling when their name isn’t told, they appear for a very short moment and then, literally, vanish into thin air. They might not be the focus of the story, and that’s fine, but if there’s little reason for them to appear, then why did they in the first place?

A girl pledging her sorority wishes to become a futa and show the older girls true passion!

Missy regrets ever pledging her sorority. The older girls are all mean to her, criticizing her petite figure. She desires more than anything to become a futanari and show them something to make their pretty, perfect bodies quiver with desire for her. But futas aren’t real. When Missy enters the Lil Temptress Coffee Shop, she finds her deepest, darkest wish can be granted. Growing something extra beneath her skirt, Missy’s futa-passion throbs hard as she impresses the stuck-up rich girls!

And takes them hard!

Missy doesn’t care for the choice she made in joining a sonority. Seeking some solace she visits her local tea shop to discover that it’s not there anymore. But the Succubus Cafe is. Missy’s deepest fantasies are but a cup of tea away and then Missy will show those that have treated her poorly just what she can really do.

While the series is called Succubus Cafe, it’s really less about the succubus herself, or the cafe for that matter, than it is for Missy to be transformed into a futa and then have a series of what can really be only described as revenge-sex with those that have been abusing her.  As such, the succubus herself is never given a name, appears only long enough for Missy to be given the means for her transformation and then vanishes into thin air. It’s disappointing because I know who this succubus is, she’s appeared in other series as well. None of her story has really been told and that’s a problem.

The background to the Cafe, the owner, those that work there, those are stories the author hasn’t touched on, save for in passing, and it just leaves so much story languishing. I keep hoping that those stories will be told, but instead the author moves onto the next character to be transformed or changed. There’s nothing given about the history of things, of developing the succubus beyond her presence, which is fleeting.

As the start of a series, there’s some promise here, but from the tease of the next work in the series, I don’t think we’ll ever see Missy again, the story will race onwards and more of the Cafe’s story will be left in the dust.

There’s so little of the succubus appearing in this work that I’m wondering just how she can be more a part of what will happen in the series going forwards. Now, I can see that this work is connected to the author’s prior series, Succubus Cafe, in many obvious ways, but that’s not really enough. If this series needs to have a succubus in the title, then perhaps it would be a good idea to have them far more within the story.

This is a problem I’ve noted in several series by this author, that being a succubus is mentioned, but she’s not at all part of the work. I dearly wish that she becomes more in this work and more so, I’d love to have the many dangling plot threads from the prior series closed up in this one. I suppose we’ll just have to see.