A Review of The Ethical Succubus by Lana Firestone

A Review of The Magician’s Curse by Linda G. Hill 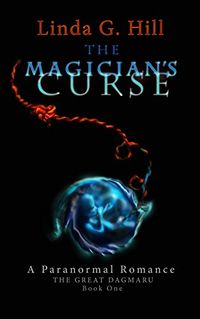 Sometimes, actually, much of the time, we’re not sure of many things. It can be hard to figure out what to do, what is happening around you. Things get more complicated when there’s an encounter that takes you from what you expected into the unexpected. In the telling of that story, managing to not overcome the characters are be a difficult thing sometimes.

Love isn’t perfect, it has flaws, aches, warts and all. But those things one expects or hears about, they are the every day things that intrude upon what otherwise is everything a soul needs. Perhaps the hardest thing of all is to understand and to find a way to forgive.

When Herman Anderson leaves home to make a better life for herself, she doesn’t expect to meet a tall, dark stranger with whom she’ll fall hopelessly in love.

Charming and mysterious, Stephen Dagmar is a stage magician seeking an assistant. The moment he sets eyes on Herman, he knows she’s the one. He brings her home to his Victorian mansion where they embark upon an extravagant romance. Yet a shadow hangs over their love. Will the curse on his family end Stephen and Herman’s happily ever after, before it really begins?

Amidst lace and leather, innocence and debauchery, The Magician’s Curse begins the Gothic tale of The Great Dagmaru. Magic and romance await.

Herman is a girl with an odd name, an odder past and an odd encounter on a train brings her to find herself in an odd situation. But none of this really matters when it comes to the way of the heart and soul, when it matters. Stephen is a man with an odd past, odd family and a secret that leaves its mark.

The work is a mix of romance, mystery and a coming of age story in many ways. The focus is on Herman herself, how she deals with things as they come at her and around her. That does allow for some amazing growth in her character, but at the same time there’s a feeling that many things about Herman haven’t been explored well. One character, a certain aunt, appears out of thin air, has a huge impact on the story, but the story about her is so thinly explained that it was almost an afterthought.

I adored Herman, her character is a delight when she’s exploring her new surroundings, coming to terms with her future and the events that confront her. But sometimes there’s a bit of a disconnect between the moments as if bits and pieces of story to flesh things out better were removed in the editing.

The descriptions of the setting tell their own story, as do the events as they are narrated. There’s a wonderful telling within the story that paints a very vivid picture and it attracted me so very much. But as deeply riveting as that is, there’s too many moments, for example, something happens which matters a great deal, which has a feeling of being skimmed over slightly. Again, it’s odd little gaps in thought, or emotion that took me out of the story at some points and I wish that didn’t happen.

Stephen, the other main character, remains a cypher throughout. His truths are shadowed and even in the moments when telling that story could have explained much, there seemed to be a reason, or event that pushed that aside, rarely returned to. He’s as much a delight as Herman, without question, but there’s a hint of missing emotion at times that strikes as being odd. This isn’t a common thing however, especially when Herman is near and he can express his heart to her. The construction of his relationship with Herman is really well done, there’s many pitfalls for both and it works, overall.

The incubus aspects of the work are muted, mainly being commented on briefly or popping up at moments to add a bit of conflict between the main characters. It does work, without question and there’s a real tragic aspect to Stephen’s incubus nature as well. The character that is caught within that aspect is dearly, deeply flawed, which brings about some of the most uncomfortable moments in the work at times. But there needs to be conflict to reach the climax and there’s so much to be found that I often wondered if anything of light would make it out of the shadows.

Not all is light and happiness, but then not all is dark and foreboding either. There’s a balance here, it works, but it could do with allowing for more time for the characters to find themselves more, seek out an understanding as well. In that comes a larger story that should be told sometime.

The work is billed as the first in a series and I really hope there will be more time spent in drawing in both Herman’s and Stephen’s families. There’s a massive story to be told in that, which really needs to be. More to the point, we’ve seen little of Stephen’s real power, or for that matter, Herman’s own. I have my thoughts about both, and it will be interesting to see if my thoughts are even close to what I think is going on.

There’s several shoes to be dropped, there’s troubles and crises to come I’m sure. How that is handled I hope will be in allowing for more telling of story and a bit more emphasis on fleshing out the shadows and bringing the truths of all of their stories fully in time.