Succubi Image of the Week 500

A Review of The Magician’s Curse by Linda G. Hill

A Review of The Ethical Succubus by Lana Firestone 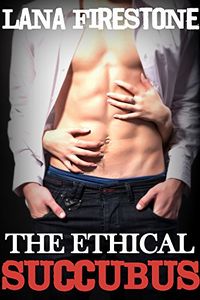 The Ethical Succubus by Lana Firestone

The thing about writing stories about succubi is that there needs to be logic to the story. Things can’t happen out of thin air, there had to be a reason why they did and how they worked. The characters, plot and world have to fit together otherwise the story can’t quite hold things together.

There are many stories in which succubi are evil, nasty or worse. While that does make for a story, the better one is what happens when a succubus in that situation has to make a choice, to be other than what she’s expected to be. More to the point, what happens when there’s nothing left and they have to start again. That’s an interesting story to consider.

Once, her life had been all power, parties, and sex. But after being betrayed and imprisoned by her evil and stunningly gorgeous ex-boyfriend, all succubus Esther Raglan wants to do is to stay safe in her sleepy mountain town hideaway. Yet when tall blond drink of water Andy Jankowski shows up on her doorstep, she can’t ignore him. He needs her help tracking down his best friend’s killer – another succubus, one of Esther’s old pals. Coming out of her hiding place might mean death, or worse. But she knows that Andy wouldn’t last five seconds against a succubus’s supernatural charm or strength. Her fellow monsters have made cruelty into a sport. Lucky for her, Esther’s always been good at playing dirty.

Esther hasn’t had the most wonderful of lives as a succubus. She’s been beaten, abused, hurt and left for dead. But she’s found a home, away from the mess she’d known. But not all messes can be forgotten and when she’d drawn back into a world she’d thought was left behind, there’s one choice to make. The right one because it matters.

The work is a delightfully complex narrative which tells of Esther’s past and the present she’d dealing with. Overall, that works really well, if at times there’s a seeming gap in some of the events that she remembers. Perhaps it’s more accurate to say that the flashbacks tell just enough to make the reader want more and then they come to a close. It does allow for the tension to build and the mystery to grow however, so it does fit into the overall plot arc.

Esther herself is possibly the most complex succubus character that I have read in some time. There’s a lot going on with her, and much time is spent within her own thoughts, trying to figure out what’s happening and the missing parts of her memories. There’s a reason for them, of course, and I think that it works overall. But at the same time there was a fair bit of confusion in the reveal, a kind of block as it were, which held back some of the story I think.

Esther’s succubus nature is very unique and the succubus aspects, mind control, seduction and transformation, I thought were very well done. I thought the world the author created and how the succubi aren’t exactly like each other works well. More so, there’s a logic to how things work, especially in one very important way, which made some odd moments become clearer when things were revealed in later chapters.

There’s not very much in the way of erotica in this work, but what there is has good heat, save for one couple which I didn’t care much for, but that’s a matter of taste. Still, the erotica isn’t the point of the work, it’s telling Esther’s story, growing her character and fitting all of the pieces of the puzzle together. At times that journey loses it’s place, which was quite noticeable in a feeling of missing sections of the story. Perhaps those parts are meant for another work, but nonetheless, at times there’s a disconnect between events and actions, especially in the climax of the work.

That climax offers some of the answers, but leaves a lot of gaps. It does bring about a satisfying ending however. The ending itself feels a little rushed, perhaps the author might have stretched things out a little more than they did. An extra ten or twenty pages wouldn’t have made much of a difference overall, but I think in shaping the story it would have been wise.

The characters have strong voices, the relationships read as being very real. There’s emotion in the dialogue, the plot remains true throughout. I would have liked to have things happen a little slower at times, especially in the moments that were critical in the work. There’s a massive question about Esther that lurks, not being answered and it’s something that tugs at me.

The author notes in the end matter that they intend this work to be the first in an ongoing series and I, for one, would like to see the unfold. Esther’s story really just began, there’s still a lot of story to tell. For me, it’s the complexity of her nature, her past, and how everything melds together that’s so attractive here.

Hopefully the many open plots will turn into the stories that are waiting to be told. Esther, in the end, has figured out what matters the most. So few stories give their characters that boon. Now the question becomes, what comes next? That should be quite the story to be told.