A Review of How to Beat a Succubus? by C. B. Snowheart

A Review of Demon Lilith by Ashley Cook 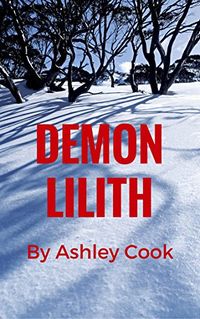 There are many works that have Lilith appear in them. Some make her to be evil, and while that’s one option in using her myth and character, it can mean that there’s a danger of her being somewhat stereotypically written and used in the story.

That’s a problem, honestly, because in doing so there’s not much time taken to make Lilith something more than just a being of evil or a force to be confronted. Evil for its own sake doesn’t really work for me. I can accept an author using her in this way, even if I don’t particular like it, but then I expect that she should be at least as well fleshed out as a character as every other major character would need to be. A one-dimensional Lilith to me just seems to be missing something and that shouldn’t happen.

A potion gone wrong, a murderous demon is now on the loose in Mystics Path. Join Regina and Scarlett, as they fight the soul demon, Lilith, and her pack of wolves. Full of gore, death, and cannibalism, this story will take you on a supernatural adventure. In time for Halloween, strange murders begin to take place in the small town of Mystics Path. Only Regina, the town witch, and Scarlett, a new girl in town, can work together to fight this monstrous demon. Who will survive? Who will win? How many will die at the hands of Lilith?

A mistake causes the return of Lilith to the world and she’s intent on having her pound of flesh for all that she’s owed. But among the depths of her darkness, some oppose her, no matter the cost and in doing so there are pitfalls that cannot be avoided.

Overall this is a work of horror that has some thin character development for the main characters and next to none for Lilith herself. At times the story reads very much like a B-movie slasher-horror film, pressing on the edges of a young adult one at that. Some of the dialogue is very haphazard and at times the meaning of the words are lost because of spelling and grammar issues. Beyond that, the characters themselves seem to be missing something in their personalities to make me care about them. I really couldn’t find my way into the work as a result and it’s a shame that I couldn’t do so.

Partly that was because I didn’t care for the horror aspects, but more so there were too many issues with editing that I just found myself being taken out of the work at many points, trying to figure out exactly what was going on in the first place. One of the most bothersome points was the concluding chapter which states, in the title, a year’s date. Then the chapter tells that the events happens one year later, but the title doesn’t match that. It’s a problem, honesty, and a shame really.

There’s quite a lot of horror aspects to the work, there’s no erotica to speak of. It’s a series of scenes in which Lilith draws others into her grasp and then various things happen to them. At times there’s really a stereotypical feel to those encounters, not to mention that Lilith herself just doesn’t have much of a personality beyond her wanting to cause harm and do evil. The ending itself took away much of what I liked about this work in being so fast, having little in the way of telling a story, and only focusing upon the shock and horror of what transpires.

There is a story here, but it’s being drowned in the editing issues more than anything else. The story is told in a rush at times, events unfold almost in a summary often and they need not have. While the main characters are given some depth, it’s often that depth is pushed to the side and left to wait as events rush by. More time spent in developing the characters, telling more about Lilith, and most of all, adding more story beyond the horror aspects would have made this a lot more interesting for me.

Lilith wasn’t much more than a means of causing some horror to be accomplished within the work. She didn’t really become much more than that and I think that’s a shame. Not really having her develop into something more than what she appears to be leaves me wanting as a whole.

That said, the work could do with some editing to make the dialogue better, clean up quite a number of spelling and grammar mistakes as well. There’s a lot of flaws in the work that just kept bothering me and it’s a shame. More so how things ended, but that’s another thing altogether.