Succubi Image of the Week 499

A Review of Nefarius Too by Cinnamon Sin

A Review of Subdivisions by Justin Bedard 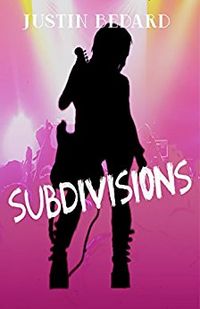 Who a character is within a story matters in that their personality, what they want and what drives them, pushes things to happen. If that character happens to be a succubus, that doesn’t mean that her nature overcomes who she is. That’s a story that interests me because it need not turn towards erotica to make a point or tell the story.

Relationships matter, how they form is important. It’s telling that story which leads towards good storytelling, full characters and an adventure that’s more than what it first seems to be. Attractiveness is, after all, not just a physical thing when one comes to figuring out what makes someone attractive.

Whoever said “life’s not out to get you” has clearly never met Joey Johnson. He works a mind-numbing retail job, he’s the only guy in his house, he’s flunked senior year, and to top everything off, he hasn’t got a single clue what he wants to do with his life.

That is until he and his knucklehead friends form a band known as the Divide with the local goth chick Alice, and all of a sudden comes adrenaline-filled and drug-induced endeavors of the most absurd proportions. From skipping out on the truant officer to ticking off a band of hipsters to playing all corners of their town, the Divide is ready to forge a path of bleeding ears and melted faces, and through it all, Joey begins seeing his mundane life a little bit differently.

Joey’s life is, overall. kind of boring. But Alice sees things differently and she especially sees something in Joey she really likes. Life sometimes takes unexpected turns and Joey’s about to find out that Alice might be the most unexpected surprise of all.

The work is, as a whole, really about the entire ensemble of characters beyond Joey and Alice, but they do push things in the direction they go in. There’s a bit of oddness in what Joey does and how Alice is so dearly attracted to him, but there’s a charm in that which I enjoyed.

Alice, the succubus of the work, really doesn’t appear as a succubus save for one short scene in which she reveals herself. While that’s a bit of a shame, considering all of the story about her that could have been explored, it doesn’t take anything away from her character. What it does do however is ask a lot of questions which aren’t answered otherwise.

The story is a bit scattered in places, the characters are trying to find themselves after all, so that all fits well. But there’s too many moments where the story seems to drive aimlessly until Alice appears and pokes Joey and the others into moving again. But it’s that connection between the characters, how they relate, which makes this a wonderfully complex and yet funny at times, read.

The work could use one more edit to clean up some odd dialogue here and there. There’s also a bit of a need to tell more of Alice’s story as well. I loved the characters, the story, and just how the entire ensemble fit together so well. If there’s one thing that I wanted more of, it would be Alice telling more about herself, revealing more about her being a succubus because that’s a story that didn’t come out with all else that happened.

This being the first work in a series, I’ll hope the author’s focus will be on who Alice is, why she is so enamoured with Joey and where things go from the ending. There’s a lot of story to uncover and I think that will be where things really find themselves.

Sometimes a succubus doesn’t have to reveal herself fully to be interesting to me, Alice does this  and it’s her character and how she relates to Joey that reality makes this work something special. I’ll be looking for another work to see what happened to Alice and what Joey and his friend find out about that.

That’s a story that should open up Alice fully.