A Review of Subdivisions by Justin Bedard

A Review of Nefarius Too by Cinnamon Sin 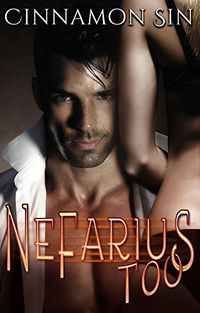 Nefarius Too by Cinnamon Sin

A short time ago I reviewed the a work called Nefarius and you can find that review here on the Tale. At the time I noted that I didn’t care for the work very much, mainly from the rather over the top horror, abuse and similar aspects that the main character was involved with. I decided to continue onwards, to see where the story went on to.

I wasn’t honestly surprised to see that the themes didn’t change, the main character was as dark as ever. As such my feelings from the first work are almost exactly how I feel about the second which I’ll be reviewing today.

The thing about writing a dark story, with dark characters in a dark way is that, at some point, all that comes to be is the darkness itself. There aren’t always answers, many times there are more questions, but somewhere along the way a reason needs to come out of the darkness and explain why.

My name is Nefarius Judge. I’m not human, though I was born in the same manner. I did have an infancy, but it certainly was not traditional. I spent my childhood learning how to inflict pain, learning a set of rules I didn’t have to follow, and learning who I am.

I am not nice, nor am I good. I am evil. Pure, unadulterated evil. I have a purpose, and for those of you who have asked, “what is the purpose of evil”, the answer you seek lies in my life. What I do improves your world in ways you fail to see because you have chosen to close your eyes to the benefit evil has on this world.

Why kill a child, you ask? Have you seen a stronger mother than the one who has lost a child and lived through that grief? Why destroy a house? Have you seen the greatness of compassion humanity is capable of when presented with a homeless family? Why destroy a future? Because, dear reader, a better one can be made. I am Nefarius Judge, and I make your world a better place.

Nefarius’ story continues with his darkness seeping into more lives, changing them into something and someone they weren’t before. But there are other forces of darkness that are far worse things and sometimes it takes something dark to deal with darkness after all.

Nefarius remains a particularly dark main character who, as a whole, has quite a number of aspects within him which suggest an incubus-like nature. At several points there are some comments he makes that offers a bit of confirmation of that point, but it doesn’t really allow much in the way of figuring him out more than he states within the pages.

Once again I found the erotica was outright need and domination and at times that domination pushed the story into places which are difficult to read. The work is clear that it has a certain focus and style and isn’t ashamed to say so. The writing is as strong as before, the main character’s narrative overcomes all else. The telling of what happens those he encounters remains as brutal as ever, a reflection of the main character and what drives him.

Once more, I couldn’t find my way into the work, mainly for how dark things were from beginning to end. It’s very much written towards a specific audience and the horror or the more violent aspects of sexuality, pushes those boundaries. It’s one thing to write darkness well, it’s another to manage to hold my interest at the same time and this work didn’t manage that simply for the levels of violence which occurred to so many of the characters.

I didn’t find anything that held me to the story, it’s quite brutal and violent and it has its appeal to some, but the darkness overcame all else. Stories of darkness can be done well, and there’s little doubt that this work is a story of darkness, clearly offering itself as such.