A Review of The Succubus: A Dungeons and Demons Story by Alrich Wild 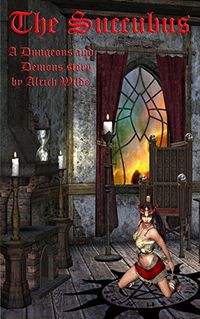 The Succubus: A Dungeons and Demons Story by Alrich Wild

There are some things I look for when reading stories about succubi. One of the most important ones, at least to me, is that calling a succubus character a succubus, and not giving her a name, seems a bit of a cop-out. Not having a name for the succubus, especially one with a central role, makes it a bit more difficult to find my way into a story.

Beyond that, not having some background to a story, to lead into it, to explain the world the characters exist within, makes it more difficult to become grounded in things. Jumping into the middle of a story always begs the question as to what happened before. Sometimes that really does matter.

In the world of Dungeons and Demons, fantasy lends itself to fantasies. Elves, dwarves, monsters, magicians, and even dragons give into their lustful natures in their own unique ways. This is a tale of one of those encounters.

After being gone on an adventure with his party for a few days, all the elven warlock Alrich can think of is getting upstairs to check on the demon he left bound within a summoning circle before he left. The succubus should be starved, as the only thing that can sustain its type are blood and lust, and this one has been days without either. This encounter will bring the elf to heights of pleasure never dreamed of by mortals, as long as he survives!

Alrich returns to his lair after an adventure and he’s looking forwards to playing with the succubus that he trapped there. But being trapped and starved for so long also means that the succubus desires something as well. The question is which of them will be paying the price and which will be learning the limits within themselves.

The story drops the reader in the midst of things, not really spending a lot of time introducing the characters, what they have been up to, or otherwise explain the world they exist in. It’s more of a scattered entry into things followed immediately afterwards by Alrich playing with the succubus that’s trapped. That then brings up the second problem in that how he managed that isn’t explained either. There’s a lot of storytelling that just seems to be set aside in the rush to get Alrich to the succubus and begin their encounter. I think that’s a real shame as the characters are interesting and there is a story to be told through them, but it’s not.

The succubus herself I thought was a very good character, being seductive and temptation and in these moments that seemed to offer something to be told. But the author never gives her a name, Alrich only refers to her as succubus or demon, so there’s not the level of character development I would have liked. The succubus seems to be part of the story for the sake of being used, or abused, by Alrich at first, but there’s some really good twists and surprises that made her far more than that.

There’s a lot of story about Alrich that’s barely touched on and that’s the part that’s missing here. How he came to be where he is, isn’t told. How he met the others in his party isn’t told. Why he lusts after another character isn’t told. There’s a lot of gaps which, I’d hope, another book might tell more of.

Similarly, the ending of the work opens the door to the succubus appearing as an ongoing threat, and I’d hope she’d be more than just a creature going for Alrich outright. She’s very good at being in the shadows, a temptation, looking for the chinks in the armour of others. That could be a story to tell, especially with the one character that has all of Alrich’s focus and fantasies.

The work could use another editing pass to improve the start of the work, tell more about Alrich and if nothing else, give the succubus a name so that she’s more of a fully realized character. There’s a lot I liked in the moments between Alrich and the succubus, and I think that opens up a really good story to tell. But there needs to be time to set up a story, put the pieces into place and then move onto the erotica and all else. The sex isn’t enough by itself without the story to back things up well.

There’s a lot of background story not told in the work overall. The beginning doesn’t explain how the succubus came to be where she is. There’s no name for the succubus as well and setting that aside, I didn’t enjoy adding the succubus literally devouring the main character overall. It seemed a bit overdone to me. Lastly the BDSM/torture aspects just took away what otherwise could have been more a story of a succubus using temptation to overcome rather than outright violence that happened a bit too much for me.

There’s a clear path towards another work considering the ending and that does interest me. I think there’s a story there to be explored. But the author really needs to develop their background story quite a lot more all things considered. The characters are too interesting for anything less.