Succubi Image of the Week 498

A Review of The Bimbo Effect by Devin U.P.

A Review of Summoning Succubi by Frater Azrael 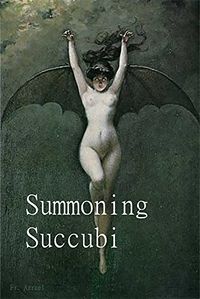 There are, from time to time, works that appear with regards to succubi that take an approach which steps over towards the discussion of the occult. The works tell of how one could summon a succubus, how that works, and some related aspects to learn and consider. Many times the works are clearly fantasy, the author having little real connection to the beliefs or understanding which underpins what they write about.

It’s when the author seems to desire to tell… something… that for me it is a richer, more thoughtful reading experience. I might not agree with the author’s views, there could be parts of their revelations that I pause at, but irregardless of that, if there’s a semblance of wanting to open one’s thoughts and minds, that’s good to see.

The question then becomes, how thin is the veil being lifted and when it is, do the words offer something or are just words alone?

This occult leaflet teaches how to meet a succubus.

The summary is very short and really doesn’t tell much in detail about this work. Overall it is a treatise of thought with regards to magik, the forming of one’s mind towards calling for succubi and how things need to unfold. It is, overall, somewhat of a summary of thought with some focused passages, but overall there’s an assumption by the author that the reader has some understanding of magik, or is willing to invest the time to discover the missing parts unsaid here.

From an academic perspective, the work is interesting as it isn’t written as much too dry or seemingly off the cuff in how things are presented. That said, there’s a certain tone from the author that makes light of things from time to time that I thought was amusing. There’s quite a bit of thought in what the work touches on, the information presented has its own reality and meaning which I think offers a view of succubi that doesn’t happen very often.

I also liked that the work tells of succubi not being, exactly, evil but rather single-minded in what they need and desire. There no tone of evil or something similar, it’s almost playful at times. But I don’t personally subscribe to these works in what they claim to tell about succubi. But to each their own of course.

However, the author states their opinion, or belief, of what succubi are, who Lilith is, and it’s not stereotypical or expected. That alone brought the descriptions of why things are to a far more intriguing level for me. Intellectually there’s something here that attracted me and its mainly in how the view of succubi is more a delight than anything else. There’s a certain hopefulness in the author’s words, that there is respect for succubi, for the magiks themselves.

This isn’t a “how-to” work by any means, nor is it meant to be I think. It’s more of an offering of someone’s understanding and sharing it beyond themselves to make others consider their words. It can be seen as fantasy by some, truth by others and in the end, as with many things, what this is comes to what the reader expects or believes in.

But in one thing the author and I agree. Succubi are the stuff of dreams.

I would have liked somewhat more detail, mainly in the explanation of succubi and Lilith herself. I think that’s really what’s missing here and if that had been more the focus it would have been nice to see. The inspiration to explore one’s own dreams comes fleetingly and that is something to be encouraged.