A Review of Huldra by J.P Knight

It’s a dress that is red. The pitchfork and horns don’t help much.

A Review of The Deal by L.L. Frost 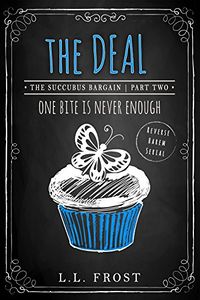 The Deal by L.L. Frost

A little while ago I reviewed the first work in the Succubus Bargain series here on the Tale and you can find that review here. I adored the main character Adie, the humour and more the delights I found in following her battle to make her single dream reality.

Today a review of the second work in the series, which I am thrilled to say is every bit as fun and heartfelt as the first work. The thing that one should remember when dealing with a succubus is that they are beings of dreams. When a succubus has a dream, there’s nothing in heaven, hell or Earth that will stop her from finding her heart’s desire.

Woe be to those that underestimate her dreams…

Locked out of her apartment with nowhere to go, Adie’s day goes from bad to worse when she finds out she’s been accused of breaking demonic law. While hunting down a red hot demon, seeking refuge with her mentor, and doing a little research, Adie finds herself stalked by more than misfortune. No matter how many times she throws it away, the contract from K & B Financial keeps popping up everywhere she goes. She has a sneaking suspicion that her chance encounter with the trio of sexy demons might be at the root of all her problems. The more she discovers, the more complicated her life becomes, and soon Adie suspects she’s stumbled into a trap.

With no home to retreat to and misfortune all around, Adie’s dream of opening a bakery is quickly slipping away. Can she figure out a way to get ahead of three determined demons without abandoning the life she’s built?

Join Adie on her (mis)adventures towards achieving a quasi-normal life among humans.

Adie’s not going to let go of her dreams, no matter how the cards might be stacked against her. There’s a reason why things are happening and she’s going to find out what they are. But knowing the reason isn’t enough, the thing Adie has to do is find a way to keep her dreams alive whatever those three demons want from her. Sometimes being pushed a little to far means taking a risk and for her dreams, Adie is willing.

The work follows on immediately after the events of the prior work and things aren’t really going much better for Adie overall. But she makes the choice to figure out what’s going on and how to try to turn things around for herself. As that unfolds, her thoughts are wonderfully focused and thoughtful, which just adds to how much I adore her.

As well, more of the world around her is revealed, both good and not so much so, which allowed for a lot of Adie’s past to be told and that explains so much about her. This all gives her character the time to develop and become everything I’ve been hoping she’d be revealed to be.

Along the way, the three demons that have plans for her peer in from time to time. As that happens they start to have depth in their personalities come out. It was nice to see the conflict be more teasingly amusing than being something awfully harsh. The tone of the series doesn’t change, even if some of the minor characters are so very grating overall.

Lovingly written, it’s clear the author is having all kinds of fun with Adie and what’s happening to her. There’s little erotica in this part of the series, but there really need not be as it’s about revealing some of the mystery and opening up the plot going forwards more than it has been.

Delightful to read, Adie just makes me smile. I hope the next part of the series allows the three demons to be less confrontational and more revealing in what they want from Adie and why. That’s still somewhat of a mystery, there’s a question as to why Adie herself was the one they want. Why is always a hard thing to uncover and I’ll be looking forward to the moment when Adie gets the upper hand for once. I think she’ll be more than capable of holding her own.

The series is just wonderful, Adie’s character just makes me smile with how she’s not willing to let go of her dreams, no matter what the obstacles are she needs to face. I so dearly am looking forwards to the rest of the series and the twists and turns I know Adie will see.

But most of all, I am so looking forwards to the moment when those that think they have Adie in a corner to discover a simple truth. The dreams of a succubus can never be lost and trying to take those dreams away leads to the inescapable.

If you can’t stand the heat, get out of the kitchen.