Succubi Image of the Week 495

A Review of A Vampire’s Seduction by Angel Lawson 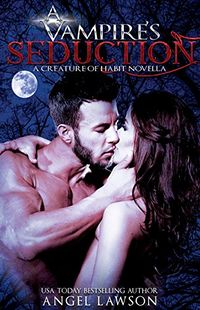 A Vampire’s Seduction by Angel Lawson

Vampires appear quite often in stories about succubi and the same frequently happens as well. The thing that makes that a problem sometimes comes to offering a larger story, then not playing off that and telling that story. Being that a series focuses upon vampires, it’s not that surprising that when succubi appear, they aren’t really the core of the story to be told.

The thing is, however, adding succubi to a world means there needs to be a background, a history to be told. That then brings about characters mentioning places and events that matter to them, give depth to their characters. If that’s not really drawn on more than in passing, it leaves a lot to be desired. For succubi, desire matters and if that desire isn’t resolved, there’s something missing.

Some vampires are the mysterious hero. You know the type. They brood, flash a crooked grin, and win the coveted heart of a human girl. Ryan’s a handsome, strong, vampire but he’s not thinking about saving damsels or tracking killers. He just wants to be left alone. Unfortunately, life is never that easy and when danger targets the coven Ryan must step up and help Grant stop a dangerous killer. This time it’s not a vampire stirring up trouble from the past.

Grant has a problem and that comes to needing Ryan’s help. That doesn’t make Ryan happy, but what makes it worse is that the problem is a succubus. Being a vampire doesn’t exactly mean he’s immune to the seductress. But the mystery isn’t the succubus he’s looking for, it’s the succubus he’s found and what it means to them both.

The work is set within a vampire series and as such all of the main characters are vampires. That said, there are two succubi that appear and they are interesting mirrors of each other. The thing is that while one of the succubi has her story told really well, her sister’s story, more pointedly, what she’s thinking and how everything came to be, doesn’t get explored all that deeply on the way to creating the conflict the book deals with.

There are scenes with lovely hints about the power of the succubi, but they aren’t stereotypically evil which I think added a lot to the work, The reasons for their actions aren’t silly or not well thought out and it makes for a story that adds a lot of depth to their characters. However, in adding that depth, there’s a lot of things said by them both, mentioned in passing, that dearly demand some exploration of the succubi society as a whole.

That doesn’t come in this work, but it isn’t the point after all. The hints are mainly favour, something to add dimensions to the succubi and they do. But they also tease a lot about succubi and that left me a little disappointed that more wasn’t said.

The erotica has some lovely heat, the scenes aren’t silly or written in a way that takes the connection from the characters and makes it irrelevant. There’s a connection and the exploration isn’t a snap of the fingers acceptance either. There’s real problems to overcome and I liked that very much as well.

There’s some minor editing needed here and there, nothing really substantial however but the little stumbles at some critical moments are a little disappointing considering how the work otherwise flows so very well. Lovely characters and there’s a lot to love in the work. It’s the little things that are missing, such as telling more about Katica and Nika, more than just teasing they are succubi, offering their stories, then rushing past that tease headlong into the climax of the story and leaving so much else left unsaid and unfinished.

I know this work isn’t really about succubi, even less so their society that’s hinted at and really that’s the problem for me. Dropping so many plots and hints about the world that Katica and Nika live in leaves me wanting that series a lot more than the vampire one that this book tells of.

Laying out some really delicious possibilities about succubi in a series where there isn’t a feeling of that ever coming out is really the one disappointing thing for me. That said, I will be watching to see if the author decides to tell the story of the succubi, and I hope as well, incubi in this universe.

There’s story to be told, I wish there had been time to do so, but that wasn’t the focus of this work. Perhaps there will be that focus in the future. It would be nice to see.