Besides saying this costume is purple… What else is there?

A Review of Circles Within Circles by Cori Vidae 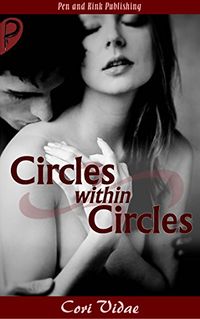 Circles Within Circles by Cori Vidae

The thing about telling a story is what’s left behind, not told, when the story is over. There are questions that pile up as a story unfolds, hints of things to be, or were long before, that come up and need to be said. Sometimes those questions aren’t answered, the past not explored, the needs unmet.

Most of all comes the question of consequences. For every action there is a reaction, a price to be paid. Leaving that question dangling into the ether, giving an open ending that doesn’t quite satisfy with the story told can be the most frustrating thing of all.

Not every answer needs to be, but at least the ending shouldn’t be the most vague of things to be found.

Mary never believed the rumors about her mother being a witch, but when a mirror inexplicably connects her to her twin brother Michael, stationed half a world away on a WWI battlefield, she reconsiders. To protect him from a battle he has reason to believe will be his last, Mary sets out to uncover any magic left on her isolated farm.

The incubus Cairn wakes from centuries of banishment to a cramped basement and a sensual, albeit surprised, woman. Perhaps she didn’t intend to summon him, but since she did, perhaps he could help… for a price.

Mary doesn’t believe the stories of her mother being a witch. But being alone, her brother at war, leads to a discovery unexpected. Now knowing that her brother’s life is hanging by a thread, she learns of magic and what it can do. What that does is bring an incubus to her side, and the question of what it all means, and what he can help her with.

The work is, at its core, a mixture of discovery, romance, desperation and the love between two siblings unbroken. The writing is wonderful, the character are full of life, expressive, have depth that was perfectly told. It’s not really that much of a story about an incubus overall than it is one of choices being made and what comes from them.

Core to this are the choices that Mary makes, what they mean to her, what they bring her to. It’s a series of moments which eventually bring Cairn into the story and it’s at that point when things become both complicated and complex. Cairn is an incubus, but not a stereotypical one, which I adored. More so, he shows thoughtfulness, caring, even love is possible. His internal monologue is telling and offers a lot of story to be told about him. But he’s a mystery not delved into deeply enough.

The moments of being with Mary, the lovely heat of that moment tell a lot about him, but there’s something else floating on the edge of the story that isn’t told. Cairn makes many comments about Mary to himself, thoughts about something being odd and there’s no resolution to that story. More so, what Mary desires, to protect her brother, seems to suggest there is a price to be paid and then comes the question as it what that price is, if Mary can accept it, more so if her brother can when the truth is known.

There’s lovely heat, a deeply emotional story about family, passions and needs. The erotica has heat, that heat is drawn out to build the story and it all works so dearly well. The ending leaves me wanting, the questions left unanswered are many and the story just feels like it’s unfinished in that respect.

The one thing missing is, overall, a conclusion to the story. If this is meant to be the first part of a series, that makes sense, if not, then all of the mystery is for not. With how well written the story is, how present the characters are, it just feels like there’s another shoe to be dropped. Whether that is from Cairn’s actions, or who he is, or the story about Mary that keeps getting hinted at, it is the one thing that raises a red flag and then goes nowhere.

I’ll hope for a part two, the work really needs it to draw the story to a satisfying conclusion. If not, then that would be a very sad thing.