A Review of the Family Succubus series by The Wolf 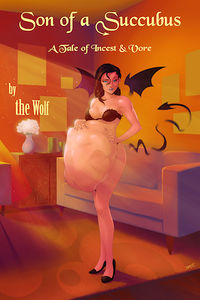 Son of a Succubus is an eBook written by The Wolf

There are some themes which I don’t really care for when it comes to stores about succubi. One of those is vore, which is something I can’t quite understand the attraction to. That said, I came across a series in which the theme of vore is very present, and takes up almost all of the story as well.

In spite of that central point to the series plot, it’s what happens outside of that there that I thought was interesting. I found myself wanting more of the characters and the world outside of the vore aspects and while there was some, wasn’t as much as I would have liked overall.

There are two works in the series:

The first work tells the story of:

When you’re a senior and your mother is a succubus, there are all kinds of advantages and pitfalls. Advantages like all the sex. Pitfalls like knowing she might actually eat you alive if your grades slip too far. Colin’s been living with this for a while, and already has one F under his belt. He’s witnessed what happens to a son that doesn’t toe the line in that last year and knows he’s likely one screw-up away from being his mom’s dinner. Still, there’s something enticing about the power she has when she eats that Colin can’t quite explain.

The second work tells of:

In this follow-up to Son of a Succubus, Phillip has always worked hard to get out of his mother’s household, get to college, and avoid the mistakes other brothers have made. He’s doing well and for a while it seemed his worries about winding up as food for a succubus were behind him. Though recently, one of his few sisters Violet has found him by chance and started spending time with Phillip … and using him for the odd sexual snack. Violet at least seems to have no desire to wind up gulping Phillip down, and the fun times are pretty good. But it’s a bad sign when Vi shows up pale, desperate, and clearly not having fed in a few weeks…

The stories of two young men having to deal with their mother and their sister being a succubus, and all of the dangers that come with them being so.

The two works are told from two different character perspectives, but are interlinked in the relationships between the characters. There’s a bit of an incest theme in the erotica and as well there’s a very strong vore theme that lurks throughout the stories until it completely takes them over in the latter half of each work.

The more traditional aspects of the succubi in the series I thought were well done, had some really well told heat and I found both succubi characters attractive in their personalities. There’s an interesting note made about them, how they came to be, which I really wanted to see explored if for no other reason than to find out about it. But the mythos of the succubi in this series comes to them being sexual beings who literally eat their partners from time to time.

It’s that vore aspect that didn’t work for me. I just found myself uncomfortable with the descriptions of being eaten, the character explaining it all and as well, how both books end. It takes a lot of the heat out of things, and I wish that it didn’t.

The writing is a little rough around the edges, though the dialogue I thought worked well. There is some lovely teasing heat at the beginning of each work, but the fall into vore was something I couldn’t enjoy and it bothers me. It does as both succubi have some really unique personalities, but they aren’t really explored all that much on the way to each work’s climax.

Really the one thing that took so much away for me was the vore aspects. Whatever heat had been made, the interest I had in the characters that appeared in the series just didn’t make it through the long descriptions of vore.

I think for those that enjoy the theme, the series might be something to consider, but for myself it meant really half a story about succubi and the other half of the story being nothing that interested me. It’s a shame because there’s some interesting ideas and plots that float around both works, but aren’t ever played upon.

A bit more story over the vore theme I think would have helped immensely to hold me in the story. Sadly it didn’t all that much.