Succubi Image of the Week 493

A Review of Succubus Sex Tales 1 by CJ Masters

A Review of Confessions of a Succubus: Volume 1 by Barbra Spencer 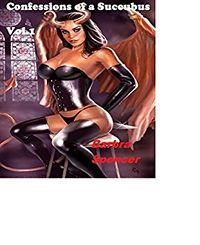 Confessions of a Succubus: Volume 1 by Barbra Spencer

There are, of late, quite a number of stories which are told from the perspective of the main character, who happens to be a succubus. Being placed into the shoes, or horns, of the character can work, if there’s something to attach one’s interest to, or if there’s something in the words that has depth, or power to them.

It’s much harder to read a work where the character tends to speak in a monotone. Where there’s little power in their words or actions and even when the inevitable erotica appears, there’s nothing which really holds one’s attention. Tone matters as does plot and characterizations. It’s not enough to tell the story as it is to give the reader a reason to care about what’s happening.

If there isn’t then what’s left is a story without any real purpose or point and that, for me, leaves a lot to be desired.

A succubus is a demon in female form or supernatural entity in folklore (traced back to medieval legend) that appears in dreams and takes the form of a woman in order to seduce men, usually through sexual activity. The male counterpart is the incubus. Religious traditions hold that repeated sexual activity with a succubus may result in the deterioration of health or even death.

The work’s summary really tells nothing about the work itself, so a better summary I think might be: Charira is a succubus with one thing on her mind. To create as much chaos as possible while having as much fun delighting in the mess she creates for those she encounters. Wrecking lives is almost as delicious as claiming souls and when both are possible, then Charira is more than pleased at the outcome.

The work is told from the perspective of Charira, the succubus of the work. She’s very stereotypical in her actions, almost to the point where I could see what she was going to do before she did so. There’s a kind of aloofness to her tone, a complete lack of compassion, understanding, or for that matter, personality as things progress. There’s really very little told about Charira herself, what she looks like, or anything that made her really attractive as a character to me.

This, most of all, is what’s missing in the work. There’s an undercurrent about Charira’s past, but that’s not explained very much, if at all. There is an appearance of another character at the end of the work which suggests a larger tale to be told, but they don’t amount to anything. Then comes, at the end of the story, Charira being very stereotypical in her actions to the point where it made the rest of the work seem like it was lost and looking for a reason to get to the conclusion.

There’s little in the way of a direction for the story, there’s no emotional tone to the words as well. There’s a need for editing to just give something to the work that’s missing here and that comes to the need for Charira to be a character that’s more than just a succubus looking for her next pray, which this work seems to be much of the time. This all makes the story a very bland read and it was, as a whole, very difficult for me to focus on the story all things considered.

That shouldn’t have been, not the least of which being that Charira’s main power seemed to be one of possessing other characters to make things happen. That could have been really interesting, but it wasn’t. This theme isn’t explored, the moment is told in an off-handed way and then the story rushes off to see what chaos Charira can make happen next. Things shouldn’t have go that way, there could have been more time spent in building up Charira’s moves, setting things up and so on. The emotional impact of her actions doesn’t really come out either, most of the characters being so dearly two dimensional as to be barely in the work.

The work needs a serious editing simply to make things read better. There’s so little life within Charira’s character, to the point that the words of the story seem to be in a monotone. There’s no real passion in the moments, there’s little in the way of telling a story overall. There’s more focus spent on the sexual encounters than really telling a story and that’s a shame.

Charira didn’t interest me and that mainly was because there’s nothing in the work that really connected me to her, or the other characters as well. The work is very much a stream of consciousness, but with nothing emotional to latch onto.

There could have been something better here, and I think in a lot of ways editing would have made a real difference most of all.

The title of the work seems to suggest there will be further works in the series and if there are I’d really like to know more about Charira herself, about why and how things work for her as a succubus. Sex alone, even with a little bit of embellishment, leaves something missing for me. Charira could be really interesting if there was more story, more depth and most of all, more point to what otherwise is a story looking for itself and, sadly, not finding it.

Oh, and the author might be well served to have the book cover be something better than it is, or how it is displayed.