A Review of Curse of the Caller by Matthew Chapel 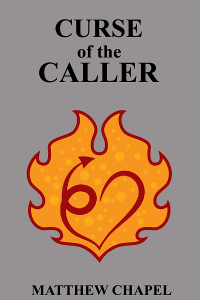 Curse of the Caller by Matthew Chapel

Overall, that’s the problem with a good idea being crammed into a story that doesn’t really get past the erotica as much as it really should have. More so, being dropped into the middle of the story without knowing what came first tends to confuse things further. While that’s a means to telling a story, it does make things a little more complicated to follow sometimes.

Nancy reclusively opens her home to a stranger who randomly calls in one night. She shares her home, her food and her wine with the mysterious woman…

Though it would seem Selina won’t be satisfied until Nancy shares her husband with her too.

Nancy wakes to sense that something isn’t right in her world. Finding her husband at the mercies of Selina, someone they just met, is shocking, but it’s more so when Selina reveals herself to be a succubus, and she has one thing in mind for her prey.

The work is an erotic hot flash which has an interesting story wrapped within it. Much of the focus is on the erotica, though there is some storytelling, plot and a bit of character development as well. But there are some issues with how that all comes to be. The author’s writing is clipped, short and seems to be missing parts of larger thoughts at times. In the same way, the dialogue of the characters seems to be missing emotion at times. The dialog tends to be short, blunt and when you might expect there’s emotional impact, that just seems be to lacking or is muted severely.

Selina, the succubus of the work, is for the most part, a rather stereotypical succubus in her character. However, some of her powers are unique and I thought that part was interesting. She’s clearly evil, wanting Nancy;s husband and shows no remorse at all in her teasing of him and underlying domination of the couple overall.

The erotica has some heat, though the dialog takes away some of that, as does the odd writing style which takes some getting used to. There’s a very clear domination of Selina, the submission of the other characters to her is wrapped up in a way that has a hard edge to it, but not so much that it feels wrong and out of place here.

It is a short work and that means there’s not quite enough time spent on the development of the characters, Selina’s reveal as a succubus is skimmed over and while her actions as a succubus to ensnare Nancy are well done, there’s just something missing. I think another editing pass would help, as would adding to the story as a whole to make it what it should be.

The work needs a serious editing to give the dialogue more emotion than it has. Similarly, the overall writing style is a bit odd and that takes away from the work and it shouldn’t. There’s a good story here about the temptations of a succubus and her effects, but it’s toyed with more than explored really.

The author notes that this is but a sampling of a larger work in progress, there being an excerpt attached with this work. It’s interesting and there’s some promise in that was well, but again there needs to be some more editing to bring depth to the characters and tell the story better than it is.

Hopefully that will happen.