A Review of The Fall: Conversations with Lucifer by Lori Green 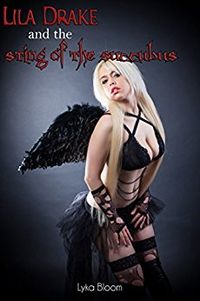 Lila Drake and the Sting of the Succubus by Lyka Bloom

I’ve known of the author Lyka Bloom through the MC community for some time, having read her works on MCStories.com among other sites and ebook retailers. Recently she published a work in which Succubi appear and today’s review will be of that work.

One of the themes that this author delves into is gender transformation, and it does appears as a theme in many of her works. Interestingly they have written some stories which had some characters bordering on being succubi, but never really had a story in which they were, more or less the focus.

The thing about identity is that you are what you believe in. Your form might change, you might not recognize the person in the mirror. But there’s one thing that’s very hard to ignore. That little voice in your mind that tells you, clearly, you know the difference between right and wrong, and how to make sure the ones that wronged you get what they deserve.

Dylan Drake is a different kind of investigator, the kind that haunts the darker corners of Los Angeles, tracking down the denizens of the night. When he finds himself poisoned by a sexy succubus, his whole world will change and the newest fight will be the one inside him.

Dylan Drake is a private dick, his beat being the things that go bump in the night. Encountering a succubus, Dylan finds he’s no longer a dick, in more than one way. Cursed and transformed into a succubus, Dylan has to overcome his, now her, own nature and see to it that this doesn’t happen to anyone else. Easier said than done perhaps, but then, once a dick, always a dick.

There’s actually more time spent in Dylan (who I’ll be referring to as Lila from here on) dealing with the succubus she’s becoming. There are times when she suddenly turns more sexual, more succubus-like and her powers come to the fore. When they do there’s some delicious mind control, or succubus temptation that appears which I really did like. It’s a bit of a shame that Lila’s succubus nature didn’t come out as much as I would have liked however. The battle within herself is really the most interesting part of this work and I’d have loved to see more of that.

Lila isn’t anything like the other succubi she encounters and that’s honestly a good thing because too many of them are far too close to being what they are expected to be for my liking. They are evil, there’s no question of that, but at the same time I’d have expected more imagination, more personality than what comes out. Even so, there’s an underlying plot which Lila finds herself part of that works well, makes sense and manages to push the story towards the climax and resolution nicely.

If there’s something missing here, I think that’s mainly in not really telling as much about the succubi in this universe as I’d have liked. Still, there’s enough to ground the story, there’s a clear ability succubi have and Lila’s struggles with her new nature fill in some of the gaps. The overall story builds up well towards the climax, the big reveal and the ending, but when those parts came it felt rushed as a whole.

The entire book’s threads, for the most part, are wound up in a few short pages and I think that didn’t work. There could have been more time spent with Lila confronting the one that made everything happen, there might have been a better conflict than what happened over two or three pages. After all that came before, the climax didn’t live up to everything else. Similarly, the conclusion of the story seemed a bit rote, a little too neat and tidy. The change in tone seems off somehow. Perhaps a few more pages of thought about what had happened and what the future held than there is might have been the difference missing here.

I really liked the characters, the story and how the powers of a succubus were used. It’s really a character evolution work, following Dylan as he deals with the cards he’s been dealt. I liked how things unfolded, how real the reactions and emotions were within Dylan nee Lila as things happened. The “private dick” tone didn’t waver throughout and that sold the story most of all. I just would have liked a better climax and ending overall, it was just too pat and short for my tastes.

I’ll hope there will be a part two, perhaps Lila isn’t quite in the situation she thinks she’s in. I’d love to see more of “Succubus Lila” from time to time, even if that’s only a little succubus on her shoulder along the way. I’ll be looking for the next book in the series and I hope that will be sooner rather than later.