A Review of Bombshell by Candy Quinn 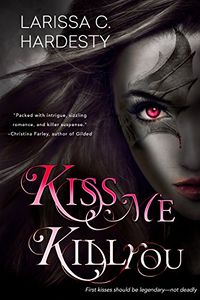 Kiss Me, Kill You by Larissa C. Hardesty

Since the Lost Girl series arrived, there’s been a number of stories that wander though the plot of a succubus coming into her powers and trying to deal with them. The shift from “knowing I am human” to “knowing I am a succubus” is fraught with disbelief, loss, confusion and more. Managing to express that in a way that offers character development is something I enjoy reading about.

Most of those stories tend to have the main character be an adult, take a very sexual turn and it’s less about the character becoming than it is about the character having an orgasm. It’s rare to find a work that deals with someone who’s sixteen and trying to deal with her world being tuned upside down in discovering she is a succubus.

Things do tend to get complicated then of course. More so when one just can’t get a straight answer at all.

Emmy Duivel believes in true love: heart-stopping kisses, candlelight dinners, and a connection that lasts forever. But not the kind of kisses that land your date in the hospital. Emmy always knew she was different, but not in the supernatural sense. Not in the succubus sense.

Paul Andinn had only one job: watch over Emmy and make sure she doesn’t expose the supernatural world. It should have been easy, but the moment he looked away, she kissed that boy, and everything changed.

He should be more upset. But he can’t. Not when he’s falling hard for her.

Emmy has always seen herself as being invisible, normal, just another face in the crowd. The only things that she’s never been able to figure out is her mother’s demand that she never kiss anyone, and just what’s up with her best friend. Turning sixteen soon, she discovers that there’s been a lot hidden from her, not the least of which is that she’s a succubus and there’s no such thing as love. But dreams are not to be trifled with, but then neither are nightmares.

The work tells of Emmy having to deal with her mother and discovering the secrets that she’s never been told, but also in learning that so much of what she thought she understood about those around her has been shrouded in shadow as well. There’s a lot of time spent in unraveling things, Emmy coming to terms with everything that happens after her first kiss and more. There’s a lot of teenage angst in this, some of which does tend to go a bit over the top at times. That said, Emmy’s character developed really well from the first page to the end of the work and I liked that quite a lot.

While there’s much time spent in telling Emmy’s thoughts, seeing the world from her, and as well Paul’s, perspective, the amount of time spent in each of them trying to figure out the other takes up so much time that, occasionally, I found myself muttering to myself they should just talk to each other. It was far more interesting when Emmy was reacting to her mother, to Lily, her friend and so on. There was more depth in Paul trying to understand himself and how to explain to Emmy just want was going on.

Much of the tone comes from, I think, that Emmy is, more or less, sixteen and so the author decided to focus on internal monologue as a whole. That does work and at many times there are some tearfully sad moments for Emmy. The character development in Emmy “growing up” works and it was captivating when she wasn’t feeling sorry for herself. There is, for me, some real questions about the other succubi and incubi in the work which come to the question of just how old they actually are. There’s a hint that some of the characters are a lot older than they seem, but it isn’t played out fully. Overall, this is something that the story stumbled on too often for me. There are so many little hints and plots that appear and then don’t really go anywhere for the rest of the work.

As the story progressed, there wasn’t nearly as much detail in how the succubi came to be, the world they existed in. There is the appearance of something called “The Powers” but that isn’t paid off by the end of the work. They are sort of a “big bad” hovering at the edges of the story, but when push comes to shove, everything they represent and what they could have brought to the story are set aside.

Similarly, the climax of the work, when Emmy is confronted with Lily, rushed by and that disappointed me. There could have been a lot more time spent in building up to that moment, revelling a lot more about the succubi, but it’s glossed over in the rush to the ending. It’s the ending that really took so much out of the story that I had liked and left me wondering why things ended as they did. There could have been some kind of resolution, but that wasn’t meant to be. There might have been something better than the feeling that there’s a chapter beyond the last one in the work that wasn’t published.

With all of the character development, the story telling and more, the ending was such a disappointment to me. That said, it does offer the possibility of the work leading towards a series and if so, then that would be interesting. But if not, then that leaves the characters hanging in a way that just didn’t work for me and felt far too expected overall.

I liked Emmy and Paul, it was a shame how Lily and the other succubi were so stereotypically written however. It also was a shame that there wasn’t more time spent in telling the story of the succubi, about “The Powers”, and what exactly everything meant. Too many dangling plots, questions and much of that came from Emmy trying to figure herself out.

Perhaps, if this work leads onto another, that would be something for the author to delve into. There’s so much that appears and isn’t used as well as it could have been, or should have been. Teenage angst is a story, but there needs to be more than that to hold things together. That well could have been from exploring the succubi and incubi more, and I think it could have.

Overall, I liked the main characters, but I dearly wished there had been more time spent in exploring the world of the succubi and not leaving so much of it hidden in the shadows. The ending could have been more than it is, but it does point towards the story continuing. I’ll hope that happens because there’s too much story left untold here and it really should be told more than it has been.