Succubi Image of the Week 491

A Review of Bombshell by Candy Quinn 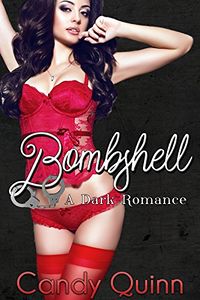 The problem with some works that are listed on Amazon’s keyword of succubus, is that, on occasion, it’s very difficult to actually see where there is a succubus in the story offered. Sometimes that’s more than just the oblique nature of the story, how the character is revealed. Some characters are, in the end, succubus wannabes and not a lot more.

It’s a shame when the character in question could well be a succubus, might really be something different if she is one. Not telling the rest of the story can make that the most frustrating thing of all.

Vivian was too good to be true. Sean is not a good man. In prison for crimes too heinous to recount, he has a guardian angel. Vivian. The bombshell walked into his life like a prayer, and she was going to bust him out. The darker his actions and words grow, the hotter she burns. But everyone has secrets. Especially Vivian.

Sean isn’t the best of men, and being so he’s in jail for a very good reason. But somehow Vivian sinks her claws into him, and his own into her. The escape is the beginning of the truth, but the truth might not set them both free.

The work is, overall, a series of very brutal, over the top sexual encounters that I didn’t find all that much heat in. Sean is abusive, controlling and overall is the sort of character one cannot help but dislike. His character is really very shallow, having one focus and beyond that, the only thing he has to define himself is the abuse that he presses onto others and his own past, which is evil and nothing more.

Vivian, the other main character, is overall a mystery. Nothing is really told about her other than she’s about as dark in her needs as Sean. She seems to feed off his abuse of her, revelling in that as the story unfolds. While that’s somewhat uninteresting, the real question becomes if Vivian is a succubus. That’s a question which the story really doesn’t give an answer to.

There’s little heat, little erotica here that I found any enjoyment in. As a plot outline for an adult film, I could see this work for some, but I didn’t care for it at all.

It’s a shame that Vivian is so much a mystery, it would have been nice to know more about her than just her sexual preferences. That’s what brings me back to the question of if she is, or is not, a succubus. If she is, that’s interesting in a lot of ways, but if not, then this is just a story of revenge and nothing more.