The Goddess by Aria

A Review of The Embrace Of The Succubus by H. Matt Synnot

A Review of Pacific Rimmed by Sasha Black

The length of books as listed, can be a bit misleading. For example, a book of 30 pages can contain two stories, meaning the main story might be a bare 12 pages overall. It happens a lot now, and it’s a bit of a bother because in many cases there’s no real clue that a book has more than one story in it.

Many times that’s a real shame because the story that is told leaves something to be desired. Perhaps it rushes through to the ending, perhaps the heat is muted by that speed. Much of the time it’s seeing a work of a certain length and hoping there’s a well developed story waiting to be discovered. Sometimes there is, but more often there isn’t.

Natsumi has always been able to see things that others can’t. The eyes of supernatural creatures have followed her through her life, and one pair of those eyes has turned lustful. Is the creature entering Natsumi’s bed something from a dream or a nightmare?

Natsumi, in her long life, has seen what most cannot. Now her encounters, once a mystery, become more needful, more temptation. The other in the room desires her and Natsumi’s own desires lead her towards a moment that has been building her entire life.

The work is a very short erotic hot flash which has some moments that have quite good heat, but there’s a rush, much of the time, to get to the next moment, the next encounter and that, at least for me, took some of the heat away. It’s a shame really as the telling of those moments is very good and Natsumi’s reactions to her encounters are heartfelt and real. In the same way, the other main character, Enenera, is very involved in the erotica as well. There’s a good balance of control as well, it’s not one character dominating the other, there’s a heat, a need and I liked that very much.

Both characters are well developed, overall, with the majority of that development being in Natsumi’s character. She has a history, needs, and a story to tell which give her a lot of depth in a very short few pages. For Enenera however, there’s somewhat less told. The overall explanation of what he is, his form, how he entwines with Natsumi is all very good. There is history as well, but it’s fleetingly told at several points. Enenera isn’t quite an incubus, though there are aspects of that within his character. His needs are very sexual and being so that puts his focus on one thing, much as it does for Natsumi from the first page.

The characters have depth, the heat has its moments as well. The main problem however is that there’s a rush within the storytelling. Natsumi’s thoughts, her actions, the telling of what’s happening seems to be in a rush, a burst of thought as she moves towards each of her sexual encounters. Being that there are quite a few points at which hints of a larger story, or at least one in which the past moments of Natsumi’s life could have been seen from Enenera’s point of view, would have added a lot. As well, more of Enenera’s own thoughts would have added more depth to his character as well.

Speed doesn’t always work, and here the rush to the ending takes away more than it should. The ending is delightful, fits with the story and leaves the characters in a place that fit well with the overall story. There’s no twist or oddity to harm the delights of the work, which I was happy to see. I just really wish there’d be more in the way of growing both characters and turning the story into something more than the flash it is.

The heat in the erotica is good, but at times seems a bit disconnected from the emotions of the moments. I’d had liked to know more about Enenera than was revealed as well. It’s a shame the work is so short and rushed, because Natsumi’s life, her encounters of the past whether from her perspective or that of Enenera I’d have liked to know more of. 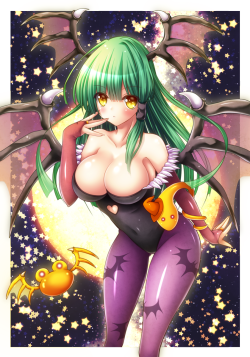