A Review of Saints and Sinners: Tales of Temptation and Innocence by Victoria Bai

A Review of Clockwork Dom Episode 1 by Shiloh Saddler 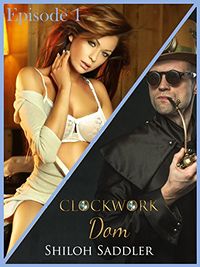 If one can manage that well, then attention shifts to the characters themselves. Who are they, what do they want are things that should drive a story forwards. The problem comes when a work is very short and there’s not really enough time spent in setting the characters up before the erotica takes over. Things can be missing and when they are, the story becomes lacking in some important ways.

A lost succubus arrives in an incubus’s den who has a fetish for torture and discovers his mechanical and steam powered playroom. If she is to feast upon the sexual essence of the humans in his stable she must play along too.

Telesa is starving in a world where steam and science have overcome the dreams of humanity. A mistake finds her in the den of Garron, an incubus with a stable of humans, angered at her appearance. But rather than being cast away, Telesa is given a choice she cannot refuse. Can an incubus and a succubus share in a world where their survival is so tenuous? Or is the better question who is the one in control?

The work, set in a steampunk universe, is lovely with depth in the setting, the erotic tones and how the characters play off each other. It’s well written, there’s a great deal of subplots and themes that drift in and out of the work as well. As such, as Telesa is drawn into Garron’s orbit, the story tells more of her submission to him, how his lair works and where the humans in his lair fit into the overall setting. The steampunk aspects are really well done, the detail of things moving about, coming into contact, and the sexual actions, and reactions, are delightfully hot and telling. But most amazing to me is a single line in the work that explains why succubi and incubi have problems in this universe. It doesn’t go into that deeply, but the suggested answer is really telling and unexpected.

The problem in the work, at least for me, is that both Telesa and Garron’s characters aren’t really explored as much as I wanted them to be. There’s so many questions about Telesa in how she came to be in the situation she finds herself, how Garron created his den, brought in the humans that exist in his lair. The work glossed over these points, leaving them a teasing question. That was the single part of this work that disappointed me the most. Telesa appears, Garron is angered, Telesa gives in and the story moves off towards the erotica. There’s so little character development in they not being human that when the erotica is over with, there’s a feeling that if neither had been said not to be human, it wouldn’t have changed the story much, if at all.

But it does matter, and once past the erotica, as the story moves towards the conclusion, the point of they being non-human becomes important once more, leading to a moment in which Garron considers his actions and what might be next. It’s a telling point and that then brings the story back around to who Telesa is exactly. The questions are left unanswered, waiting for the next work in the series and when that comes to be, there might be some surprises for all involved.

Saying that Telesa is a Succubus and Garron in an incubus is all good, but then not playing that off, to explain why Telesa finds herself where she is, or how Garron came to the position he holds leaves a lot of story to the side. There’s a fair balance between the erotica and the storytelling here, and I liked that very much, but too often there’s a hint of something else going on and that never gets played out as I wanted it to.

A good start to a new series, but there needs to be more time spent in the characters themselves than just the setting and the erotica. Telesa is a mystery overall as is Garron. With the setting done and the world set, then next thing should be opening both to who they are and what each wants and needs.

I hope there will be if for no other reason than to tell who Telesa and Garron are, more than just they being a succubus looking for a meal and an incubus in control.