A Review of The Wrapture by Castiel Vitaro

A Review of Demoness by Misty Vixen 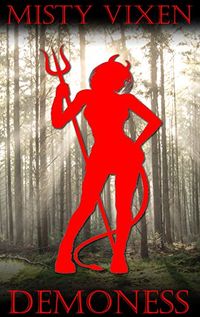 Not all stories I review on the Tale have characters that are succubi, some of them have aspects of being a succubus, but it isn’t all they are. In the same way, not all stories about succubi have to be just about their sexuality, it can be about who they are, what they seek and most of all, their desires, whatever they are.

Desires matter in stories, they offer the way into a character, to see why they made the choices they did, but also shape their personalities. The need for companionship, for love, for a connection matters and in telling that story comes the character development that I seek most of all.

John Greenfield wakes up in his woodbound cabin and, suffering from a bad hangover, wonders what he’s doing with his life. He lives in a small town full of small-minded idiots, works as a hunter, and knows he can live a better life. But nothing seems to compel him enough to do so.

That all changes when, out hunting for food that morning, he comes across an unconscious, wounded female demon. And her pursuers are nearby. Unwilling to leave her to her fate, he brings her back to his cabin and heals her. When she awakens, the demoness, Yelena, after determining that he isn’t going to attack her, asks a favor. She needs to get back to her own realm, but the magic needed to travel between worlds will take close to one week to gather, and she obviously needs somewhere to hide and recuperate.

John agrees to let her stay, and as they begin getting to know each other, things start getting very hot and heavy, and John finds himself falling for someone he never thought possible…

John is at a loss, seeking something more than what he finds around him. Encountering Yelena, a demoness being attacked, he makes the choice to help her and in doing so opens his eyes to the possibility of something he hadn’t found before. Someone to care about and in return, Yelena finds something she’s never encountered before, the ability to care, want and need someone.

The work is told from the perspective of John and being so there’s a deep sadness at the beginning of the work that seeps into things and is somewhat hard for John to get out of. It does tell of his character, of the strength he needs to make a choice, to help Yelena and deal with want comes afterwards. John is interesting and has a lot of baggage to deal with which I thought made good storytelling.

Similarly, Yelena is at a loss at the beginning of the work, but over time her guard drops and she opens herself to John, finding her own emotional needs and discovering that the connection they have is more than unexpected, it becomes dearly needed for her. Yelena isn’t quite a succubus, though her powers are fuelled by the passions she shares with John. There are some aspects of her powers which suggest she is a succubus, and I tend to think of her as one, overall.

That being so, the erotica turns not so much about Yelena as it does about John. He has quite a history with some other supernatural beings, which is delightfully fun at times. There are a series of short hot flashes which make up the erotica in the story, most of which centre on Yelena and John, but not exclusively. The heat simmers, it isn’t over the top or strange. There’s a purpose to each scene and it doesn’t overcome the storytelling either. The erotica is delicious and I enjoyed the humour that cropped into the moments most of all.

The work is very well written, both John and Yelena’s characters grow and become more than what they first appear to be. The growth of their characters, the development of their relationship grows in way that isn’t seen very often in such stories. While there is erotica, it isn’t the be all and end all of the work which was nice to see. It’s thoughtful when it should be and moves into action when that’s needed as well.

I’d have liked to know more about Yelena’s world, about her kind, about why things were as they are for her. There’s a story in that, but it isn’t critical to the work as it stands. Still, it would have given more depth to Yelena, hopefully as much as John’s character has. The work is a lovely read and I liked it overall, but the ending was far too quick for my liking, and as well the closing pages left so many questions about the characters future that I really wanted to see a bit more of.

The ending is a bit disappointing, leaving me wanting to see what comes next. It’s a shame that not all of the threads were closed up but at the same time the story is wonderfully told, both John and Yelena tell an involved and heart-felt story.

I’d love to see where things go from where the story closes, because that offered story is just as investing as the one that has been told. Perhaps it will, some time in the future. Yelena might not be exactly a succubus, but that’s what makes her and John’s story so captivating. It’s about finding a connection and where that leads the characters.