A Review of The Portal Curse by J.P. Murgly 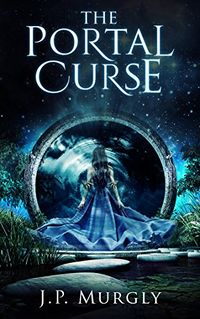 The Portal Curse by J.P. Murgly

A story reviewed today on the Tale that’s a bit of a coming of age story, a mystery and an adventure as well. But along with the strife, the conflict and the discovery comes something quite unexpected, all things considered. A story of finding within oneself the need to be more, even if one cannot see it within themselves, or in spite of those that surround them.

There are things we discover about ourselves that change things. Not who we are, but rather how we see the world around us. Sometimes that view leads towards the making of a choice, seeking out an answer. Other times it serves to bring about only more questions and battles to be fought both within and without.

Seventeen-year-old Claire would scoff at the idea that heaven or hell is waiting for her. She would still be a little offended if someone suggested that place was hell, though, because she considers herself basically a decent human being. And because she doesn’t know her own darkest secret.

Claire actually has very little use for plans from either above or below because she is most comfortable when things proceed according to her own highly reasonable and sensible plans. Plans the black-haired boy who shows up outside Claire’s high-school could never have a place in: The way the other girls from school swarm around him is far from reasonable and the visions Claire has when he looks at her are not at all sensible.

She would keep a safe distance but that is easier said than done. The stranger is an outcast and a demon who preys on hidden desires and feeds on the souls of his victims. And he has sensed something in Claire he can’t resist. A secret that will turn her life on its head and force the two of them into an uneasy alliance to survive when the portal curse is awakened.

Claire’s life hasn’t been the simplest of times, but things have become quite a lot more complicated all of a sudden. A new guy’s appeared at school and all of the girls are going crazy over him. But there’s something off about him, and even knowing that Claire finds herself being pulled into his orbit with everyone else. Cole isn’t exactly what he seems and learning that first hand takes Claire to an understanding of herself and her hidden past that’s unexpected.

The work is an investing mixture of a coming of age story, an adventure and a mystery. The plots are complex, twisting around each other and offering quite a lot to think about as they unfold. It isn’t so much a romance or erotica as well, though there is the occasional edging towards the theme before things pull back. The core of things is Claire and Cole, how they are doing at the hip to this adventure and conflict they find themselves placed upon.

Claire’s character is very complex and fascinating, it’s a telling story in how she’s dealt with her life so far and how she tries to come to terms with everything that’s going on around her. There’s a hidden strength within her, something that, it seems, her friends and family can’t quite manage to see within her. But it’s there and over time that becomes more and more important as to how she accepts, rejects and otherwise comes to terms with the truth. Along the way, her conflict with Cole provides the way into her soul. her hidden truths and that’s quite a remarkable thing.

Cole, the incubus of this work, is generally unlikeable through much of the story. He’s arrogant, self-centred and seems to have absolutely no idea how to deal with Claire when things change for him. It’s a bit disappointing overall in that his development as a character keeps butting against his ego and the situations he’s put into. He’s not stereotypical, not by any means, but his own nature works against him for so long that anything Claire attempts, or he does in return, always seems to wind up in more confusion, distrust and dislike.

Much of that, overall, comes to Claire’s friends who seem to be caught up in their own worlds, not really seeing what’s happening around them. While they want to help, try to, they so often come rushing into a situation in which they need not be, or get in the way of a problem being solved. What’s more disappointing in that is they don’t really develop from the start to the finish of the work. They remain, at least personality-wise, static. They don’t change their outlook, their being, who they are. The flaws are there, unshakable it seems, and I wish they’d become slightly more open to thinking outside of their comfort zone than they are.

The work is very complex, the discovery of Claire’s being takes some time to come into focus. Those scenes are mixed metaphors, seeking meaning and it’s sometimes difficult to figure out what’s happening and why. The attempts by Cole to tell of himself, in the same way, are difficult to put into words, seeking meaning, but getting sidetracked along the way because of events that jump in to interrupt things.

The ending held some promise, seemingly offering a path for the story to continue upon. The tension remains, in really all of the characters, to be rediscovered. While Claire’s story, and her past, is partially revealed, there’s a lot that isn’t. There’s questions about her powers, about why she is what she is. The ending isn’t a bad one, really, I think it worked in how the story was told. Perhaps in the end the thing that matters is the light ahead and the hope it can bring.

There’s quite a lot to like about this work, certainly the main characters held my attention. But Claire’s friends, as a whole, just didn’t quite find their way for me. There is so much character development with Claire and Cole, but next to nothing for everyone else involved. It’s a shame because the apathy, or resistance, just made everything else drag along in the story. I’m not sure that worked, all things considered.

I’d like to see what comes next, if only to be able to see Cole’s path further and Claire’s future. At the same time, I’d like to see Claire’s friends mature, if only slightly, from who they were in this work towards being something I think they all might be, given the chance.