A Review of Bronco’s Rough Ride by Siobhan Muir

A Review of The Forbidden Kiss by Christopher Mentzer 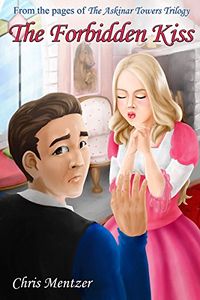 The Forbidden Kiss by Christopher Mentzer

Sometimes in the telling of a story, there’s another story hinted at which offers something as much, if not more so, interesting than the story that’s being told.

Relationships matter, the past has meaning and when that story isn’t told, then it tends to shift attention from the main story towards what hasn’t, or isn’t said. While the story might not focus on succubi, if it has one, and she’s very important to the story itself, then telling her story, and how she relates to the main character needs to be told. Not all things are forbidden and sometimes a kiss isn’t always a kiss.

Especially when there is a succubus, or for that matter succubi involved.

Derek Banter, known bard in the land of Vanora, finds himself in between gigs. He goes in search of adventure in the northern country of Ardenger. He is hired by King Cantrell to rescue his daughter from the clutches of an evil wizard known as Saydens the Black.

His traveling companion is an old flame he’d just as soon forget ever meeting and together they storm the tower. The rescue doesn’t quite go as planned and the results are surprising. All through his quest, one statement rings through his mind: Do not kiss her, it is forbidden!

Derek tells a story of fate, lives and loves which brings about questions that he might not have all of the answers for. But if there’s one thing he is sure of, it’s that his past comes back to haunt him and remind him of what was, and what might be, whether he knows or not.

The work is a telling of a past story from the memories of the main character, Derek, and in the telling of the story there’s quite a number of questions left unanswered, which seemed a bit of a shame when the story was done. It’s a cute little story about an adventure, the moments along the way, and how Derek’s past with Sonya, a succubus, is entwined with him. It’s a bit simplistic in tone, occasionally drifting from moment to moment, but the main story offers some lovely thoughts and ideas which I enjoyed.

As the work is mainly focused upon this adventure, Derek’s past with Sonya isn’t explained really well. I thought that was a shame as there’s a lot of story hidden in the shadows which never really sees the light. Mentions of succubi, that there are many of them, is one of those points, but then there’s more to be found beyond that. Nonetheless, Sonya, along with the other succubi mentioned, have stories to tell and they don’t in this work. It’s a missing piece of the story for me, and one that’s very present considering how Sonya and Derek dance around the question, leaving the reader to wonder just how the two of them came together and what happened in the past, present and future.

The work tells a fun story with a hint of mystery within it. There’s no erotica to speak of, but that’s not the point of the work, so it doesn’t take away from what is, at the core, a really well constructed story. Getting from the start to the finish allows a number of characters to appear, seemingly all having connections with Derek in his past, but like the succubi, those relationships aren’t detailed very strongly.

I think the main reason for so much of the detail being skimmed over is that Derek is telling the story in his own words to a listener, so there’s a need to keep to the main story and not branch too far away from it. In doing so, the work managed to hold my attention, offer things to think about and in that the writing is very good. The climax of the work is a little bit disappointing in that the story comes to a close, then rushes into the here and now where Derek finds himself facing his past. It’s a good place to end the story, without question however.

Perhaps in how things end it will mean that the author will take things back to telling more about Derek himself, Sonya, and with some luck, also tell about succubi in this story universe as well. I think there’s the makings of an interesting series here and I hope that will be.

The thing about this work is that it teases so much, but the story doesn’t delve into the relationship that Derek has. I really would like to know more about his past, that of Sonya as well, but most of all, the note of there being a society of succubi is what really interests me. It’s not the core of this work of course, so it’s only a mention. Still, the next work, should there be one, I’d love to see what hasn’t been told to be told, even if only a little so.

Sex with the Supernatural (eBook)
Tainted Power: The Complete Series (eBook)
Her Resistance (eBook)
In a Devil Bind (eBook)
His Soul to Keep (eBook)